To celebrate the Duke of Edinburgh’s 90th birthday, his wife appointed him Lord High Admiral of Britain’s Royal Navy. Now that he is 94, who knows what he might get? 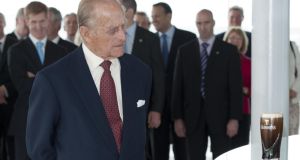 To put things into perspective, Raheem Sterling costs Liverpool Football Club £30,000 a week. For 12 weeks of Sterling service, the Merseysiderers could have Prince Philip for the whole 12 months.

To celebrate the Duke of Edinburgh’s 90th birthday, his wife, the Queen of England, appointed him Lord High Admiral of Britain’s Royal Navy (the highest rank anyone other than the sovereign can hold). Now that he is 94, who knows what he might get?

Proving that age is just a number, Prince Philip was out working at Cowes on the Isle of Wight this week, where he conducted a review of a fleet of more than 180 yachts.

The Duke was joined by a veritable who’s who of royalty for the occasion, among them his daughter Princess Anne, 64, and Albert II of Monaco, 57.

He was born on the Greek island of Corfu into the House of Schleswig-Holstein-Sonderburg-Glücksburg, a member of both the Greek and Danish royal families. Philip’s family was exiled from Greece when he was an infant and he was educated in France, Germany, and the UK, before joining the British Royal Navy in 1939, at the age of 18.

Back then, monarchs all over Europe - generations of kings, kaisers and czars - were like one big clan, often related through intermarriage.

It was not at all unusual that Lieutenant Philip Mountbatten would meet, fall in love with and marry Lilibet Windsor. The future Queen Elizabeth II of England and the Duke are distant cousins, sharing a great-great-grandmother in Britain’s Queen Victoria.

Of course they would go on to share a lot more. The children (Charles, Anne, Andrew and Edward). The grandchildren - and now the great-grandchildren. The pomp. The ceremony.

But most of all, they have shared their lives for 68 years.

“They have a very interesting relationship,” said Gyles Brandreth, author of Philip & Elizabeth: Portrait of a Marriage.

“He’s the only person in the world who can treat her like a normal woman. And he does. I mean, no one else is normal with her. There is an invisible moat around the queen at all times. That in mind, even her children will bow and curtsy to her.”

As for the famous twinkle in the Duke’s eye and mumblings of his love for the company of women, the late Lord Charteris, who worked for Queen Elizabeth as her private secretary for 27 years, dismissed all such gossip. “I am aware what people say, and have said for years, but I know of no evidence of any kind, no evidence at all, and, if there were any, I rather think I would.”

So no need to read anything sinister into his sleeping arrangements, then.

When the family moved into Clarence House, early in the summer of 1949, Elizabeth and Philip had adjacent, connecting bedrooms.

“In England the upper class always have had separate bedrooms,” explained their cousin Lady Pamela Mountbatten. “You don’t want to be bothered with snoring, or someone flinging a leg around. Then when you are feeling cozy you share your room sometimes. It is lovely to be able to choose.”

Recent times have seen Prince Philip accompany his wife to Ireland as she sought to mend hundreds of years of bridges.

“His wife and I” went down a storm in the Republic in 2011. As recently as June of last year, Philip accompanied the Queen to the Co Antrim set of Game of Thrones. He’s an old hand at that particular game, apparently.

The running joke about Prince Philip’ gift of the gab has haunted him for years.

The man who once asked a driving instructor in Oban, Scotland: “How do you keep the natives off the booze long enough to get them through the test?” has been keeping the press on tenterhooks for decades as they await the next tasty titbit to spew from his blunt mouth.

Four years ago, we waited for our own Irish-inflected Duke-ism - willing the man who asked an Australian Aborigine in 2002 if he was “still throwing spears?” to put his foot in it.

We had to settle for Philip’s quip at the Guinness brewery in Dublin. There, he asked master brewer Fergal Murray whether the famous stout was made using water from the River Liffey.

“It was a throwaway remark made as part of the banter at the bar between Philip and the master brewer,” a Guinness spokeswoman said. Nothing to see here, then.

“When you think of what he’s had to do for 60 years, it’s quite amazing,” says Phil Dampier, who has written a whole book of “Edinburgh-isms”. “He’s got to have some sense of humour to get through it all, hasn’t he?”

In 1947, on the morning of his wedding to Elizabeth Windsor (as the queen of England was then known) the Greek Orthodox convert to the Church of England was understandably nervous.

“I saw him just after breakfast that morning,” said Patricia Mountbatten - Lord Louis Mountbatten’s elder daughter. “We were alone together - we were cousins and we knew each other very well - and I said something about what an exciting day it was and, suddenly, he said to me, ‘Am I being very brave or very foolish?’”

The answer to that question lies in whether you think £359,000 a year is enough for the job.

What is the going rate for a home in...Co Kerry?
8

Nuala O’Faolain, a feminist whose happiness was often tethered to men
10