‘Ugly right-wing views? Is this about my ‘Irish Times’ letter?’ 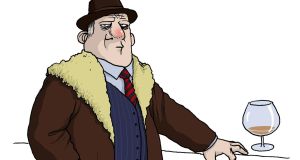 'All I can smell is cigors and the strong after-hum of the six fingers of Hennessy XO that he had for breakfast.'

We meet in the main cor pork of UCD. The old man looks a complete state in his lucky Cole Haan camel hair coat and his ridiculous hat. He takes a deep breath and goes, “Can you smell that, Kicker?”

All I can smell is cigors and the strong after-hum of the six fingers of Hennessy XO that he had for breakfast. I’m like, “What am I supposedly smelling?”

“Yeah, you did an evening course here.”

He goes, “And you wore the famous colours of UCD!” and there’s, like, silence between us then. I can tell he’s trying to remember what colours UCD wear. I haven’t a clue either.

I’m there, “I only played for them twice. And the second time I was still pissed from the night before.”

“Wonderful, Ronan!” the old man goes. “Your father and I were just discussing what it means to be young with a burning desire to hoover up all the knowledge in the world! Oh, I could tell you some stories about me and this place!”

I’m there “Except you don’t have any.”

Yeah, no, just to fill you in, my old man has offered UCD a blank cheque to build an O’Carroll-Kelly building on the campus. Like I said, money is no object. The only precondition is that it has to be grander – his word – than O’Reilly Hall and at least one storey higher – non-negotiable – than the O’Brien Centre for Science.

Unlike most people on this side of the city, UCD don’t just accept gifts with no questions asked. The old man has to actually persuade them that the building is necessary and not his way of getting one up on the two Irish businessmen he would most like to be. Which is why he’s planning to address an audience of 300 students and staff this morning.

“Right,” he goes, “let’s make our way to the Newman Building, ” and he storts looking around him, not a clue which direction he should be heading in.

I’m there, “What’s wrong, have they moved it since you were here last?” and I’m one to talk because I don’t know where the Newman Building is either. My memories of UCD are watching a lot of Judge Judy and learning that all women from Tipperary are weirdly good at pool.

You can probably picture the old man’s face. He’s like, “What in the name of Hades is going on!”

I’m there, “Okay, I’m going to go and see what time the bor opens,” just letting him know that he’s on his own here. “Are you coming, Ro?”

One of the students involved in the protest – a dude – walks up to my old man and goes, “Charles O’Carroll-Kelly? We are picketing your talk today because we don’t need your money and we don’t need to hear your ugly, right-wing views.”

The old man’s like, “Ugly right-wing views? Is this about my letter to The Irish Times, where I said I wouldn’t get on an airplane if the pilot was a woman, unless there was a man sitting beside her? Ditto, buses.”

We want to build a wall around Cork! And there’s nobody happier about the wall than the people of Cork themselves!

“No, it’s about your political party and everything it represents – namely, fascism.”

“How dare you! There’s nothing fascist about New Republic!”

“You want to force women to resit their driving test every 12 months to prove their competency to drive.”

“I originally suggested six, but I was forced into a compromise by the women’s wing of the party – yes, the two ladies in question were very upset about that one.”

“You want to flood Cork.”

“No, we want to build a wall around Cork! And there’s nobody happier about the wall than the people of Cork themselves! Keep Dublin people out – that’s how they see it! We took two seats there in 2016! No, if we wanted to flood anywhere, it would be the east of Donegal and the northern parts of Monaghan, Cavan and Louth, thus turning the six counties into Northern Island! I proposed this in one of my very first letters to The Irish Times back in 1968, would you believe? We wouldn’t have all these – inverted commas – backstop issues today if Jack Lynch had gone with my proposal to kick the confounded place out into the middle of the North Sea!”

The dude just shakes his head like he can’t believe what he’s actually hearing. Welcome to my life, I think. When I was growing up, this was basically what mealtimes were like.

“Well, I’m sorry,” the dude goes, “we don’t allow fascists to spread their poison on this campus.”

The old man’s like, “I would have said that the suppression of free speech is one of the central tenets of fascism. Wouldn’t you, Ross?”

I’m like, “Hey, leave me out of it. I think it’s great seeing you put in your box like this.”

The old man goes, “I have an appointment to speak here today and speak is what I intend to do! I command you to step aside!”

The dude’s there, “Hey, you can go in if you want. Just to warn you, though, there’s literally no one in there.”

The old man laughs like he doesn’t actually believe him? He pushes past him into the building. We all stand around saying nothing for a good, like, 60 seconds until the old man re-emerges through the doors of the building, his face all red, and frothing from the mouth. He goes, “You bloody ingrates! You haven’t heard the last of this!”

I turn to the student dude and I go, “I’ve just come up with the phrase ‘CO’CK Blocked’. You can use that in the student paper if you want.”