Reality TV is all just a bit of fun, until someone gets hurt

Jennifer O'Connell on The Jeremy Kyle Show, emblem for these paradoxical times 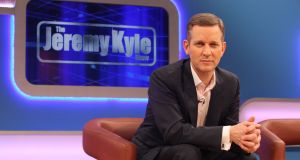 Jeremy Kyle: his show, launched in 2005, was one of the early TV formats to capitalise on our endless appetite for human suffering. Photograph: ITV

We’re living in an age, so we’re always being told, when feelings preside over facts. On social media, lies travel faster and go further than the truth. We no longer trust experts, facts or rational argument. We vote for politicians, or we protest against them, not because we agree or disagree with their policies – not even because they have any. We vote for them because they are capable of penetrating the apathy, and whipping us up into a frenzy of . . . well, anything, as long as it’s a feeling. We love feelings.

This is a strange and paradoxical time to be alive. Because just as feelings took over the world, empathy seems to have departed it. The thing that’s most striking about this age isn’t the decline of rationality or the pre-eminence of feeling; it’s the retreat of humanity.

The big promise of the social media companies like Facebook was that they would “bring us closer together and build a global community”. It was a mission statement steeped in empathy, and the hope of deeper, more meaningful connections. Facebook now has 2.38 billion users, and the world is arguably more divided along tribal and ideological lines than ever. This is attributable in no small part to Facebook’s platforms, which have been used to spy on us, intensify political and social divisions, spread misinformation and fake news, commodify bullying, livestream violence and foster all manner of human unhappiness.

In reality, guests come on to be berated and harangued by judge, jury and executioner Kyle, and jeered by his audience

Facebook’s mission of bringing us closer together has been a colossal failure – if, indeed, that was its mission, as opposed to, say, the lining of shareholders’ pockets by filling our every conscious moment with advertising.

But it is not Facebook that is the most apt emblem for these paradoxical times. It’s The Jeremy Kyle Show.

Jeremy Kyle, on the off-chance anyone out there remains among the blissfully uninitiated, launched in 2005. It was one of the earliest TV formats in this part of the world to capitalise on our endless appetite for human suffering. Guests come on the programme to solve disputes with one another about paternity, infidelity, domestic abuse, parenting, money, alcohol. That’s the theory.

In reality, they come on to be berated and harangued by judge, jury and executioner Kyle, and jeered by his audience. As Carole Cadwalladr wrote in the Guardian in 2008: “And what guests. All human life is here: cheating husbands, delinquent children, tearaway teens, feckless fathers, the long-term unemployed, the clinically depressed, wife-beaters, husband-beaters, child-beaters, victims of abuse, perpetrators of abuse, alcoholics, junkies, the sexually insecure, the sexually confused, the sexually polymorphous.”

Anger, vitriol and the ability to sit in judgement over the desperate and the broken are its secret sauce. The format requires that, at some point, it should dissolve into a shouting match, if not a full-on brawl. In 2007, a judge called it a “a form of human bear-baiting”; others, such as Piers Morgan, insist the show works because of Kyle’s “empathy”.

Anyway, the show was finally shelved after the entirely predictable happened, and one of its contestants, a 62-year-old man called Steve Dymond, took his own life. Dymond went on the programme to try to convince his girlfriend to take him back. He took a polygraph test (polygraph machines and DNA tests are to Jeremy Kyle what cockroach snacks are to I’m A Celebrity) to prove he hadn’t been cheating. He failed the test and died days later.

In an extraordinary email, the production team said the decision to take it off the air was “not in any way a reflection on the show, but the best way we think we can protect the show and the production team from the reaction”. There’s that famous empathy again. That blinding, Kyle-brand moral certainty. As someone asked on Twitter, “Who knew there was such a thing as the moral lowground?” Well, to be frank, anyone who has been paying attention. Every time we think we’ve hit it, the floor collapses underneath us again.

We’re all hooked on feelings now, especially when those feelings involve other people’s pain, suffering and desperation

We might have thought we had reached the moral lowground of popular entertainment with the death by suicide of a former Love Island contestant, 26-year-old Mike Thalassitis, earlier this year. Or a year ago, with the death of a 2016 Love Island contestant, Sophie Gradon. That some people struggle to cope with the pressure of reality TV exposure shouldn’t come as a shock – putting them under intense pressure and pushing them to the brink is the whole point.

The format and backdrop of reality TV shows may evolve, but their central premise remains the same: willing participants are deprived of their freedom and privacy, publicly scrutinised, goaded and humiliated, and sometimes actually starved, for the entirely dubious prize of becoming a household name.

We can’t get enough of it, because we’re all hooked on feelings now, especially when those feelings involve other people’s pain, suffering and desperation. Love Island is coming back in a few weeks. The vacuum temporarily opened up by Jeremy Kyle will be filled by something else – more Jeremy Kyle, probably. Some newer, bleaker form of human bear-baiting. It’s all harmless, of course. A guilty pleasure. A rush of heady feeling. A bit of fun, until someone gets hurt.

Mary Berry’s Ireland vist: here’s what she did and what she cooked

Eileen Flynn: ‘Your child is treated different when they’re born, as a Traveller’

Eileen Flynn: ‘Your child is treated different when they’re born, as a Traveller’
5

Mary Berry’s Ireland vist: here’s what she did and what she cooked
7