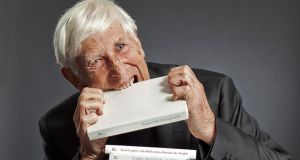 Throughout his life, Tomi Ungerer was involved in humanitarian causes from nuclear disarmament to Amnesty International to Reporters without Borders to European integration. Photograph: Gaëtan Bally (Keystone)/Diogenes Verlag

The world famous illustrator, graphic designer, social satirist and children’s author Tomi Ungerer died in his sleep in his home in west Cork at the age of 87.

Working on a collection of short stories right up until his death, the prolific French-born artist published over 140 books (translated into 30 languages) and created thousands of sketches, drawings and sculpted objects. He spoke and wrote in English, German and French but always wrote his children’s books in English. Ungerer and his third wife Yvonne Wright settled in an isolated farmhouse on the Mizen Peninsula in west Cork in 1976.

The youngest of four children, Jean-Thomas “Tomi” Ungerer was born in Strasbourg the son of Theodore Ungerer and Alice (Essler) Urgerer. His father, who died when Tomi was just three years old, was the co-owner of a factory that produced astronomical clocks. Following her husband’s death, his mother moved the family to Logelbach near the Alsatian city of Colmar.

It was a place and time of tension, the area being half-German, half-French; part-Protestant (as was his household), part-Catholic; and troubled by class divisions. These experiences contributed to Ungerer’s life-long revulsion of conflict and injustice and his desire to deride the darker side of human nature and society through humour and satire.

During the war years, Ungerer said he was forced to join the Hitler Youth and dig trenches for the German army but while there, he filled his notebooks with battlefield scenes.

After failing his high school graduation exams, he joined the French camel cavalry regiment in Algeria but was discharged due to illness. He then attended the Municipal School of Decorative Arts in Strasbourg for a year, after which he spent time travelling around Europe. In 1955, He moved to New York with two trunks full of drawings and manuscripts.

In New York, he found work easily as an illustrator for the New York Times, Life and Harper’s Bazaar, while creating posters for movies such as Stanley Kubrick’s Dr Strangelove (1964). He mixed in artistic circles with writers Tom Wolfe and Philip Roth and composer Philip Glass and others.

Initially, Ungerer was best-known for his illustrated children’s books, particularly his quirky series about a family of pigs, The Mellops. He also did the illustrations for Jeff Brown’s 1964 classic children’s book, Flat Stanley.

In the 1960s, his work in advertising reached wider audiences. He devised a slogan for the New York State Lottery, “Expect the Unexpected” that echoed a saying by the Greek philosopher Heraclitus and was later used by the American alternative news and cultural publication, the Village Voice.

The controversy led to Ungerer being effectively blacklisted in the United States and in 1971, he and his third wife, Yvonne Wright, moved to a farm in Nova Scotia, Canada. In 1976, the couple moved again – this time to west Cork where they raised their three children, Aria, Pascal and Lukas, in a remote farmhouse on the Mizen peninsula. The family lived privately yet mixed with local people, many of whom knew little of the prodigious output of the artist farmer in their midst.

Although he was shunned in the US, his popularity soared in Europe, particularly in Germany and France where he sold millions of book. In 1981, a retrospective of his work was exhibited in Paris, Munich, Dublin and London, among other places. In 2007, the Tomi Ungerer Museum opened in Strasbourg. But it wasn’t until 2015, that he had his first American retrospective, at the Drawing Centre in New York.

Throughout his life, Ungerer was involved in humanitarian causes from nuclear disarmament to Amnesty International to Reporters without Borders and more recently European integration. He once wrote, “I loathe . . . injustice, violence and discrimination . . . and I long for respect and peace.” His numerous awards include the Hans Christian Anderson prize for Children’s Literature (1998), the European Prize for Culture (1999) and the Lifetime Achievement Award of the Society of Illustrators in the USA (2011).

Ungerer also wrote autobiographical works, including Tomi: A Childhood Under the Nazis (published in English in 1991) and Far Out Isn’t Far Enough (1983), a memoir about his six years living in subsistence in Canada whose title was used in the 2012 documentary about him by Brad Bernstein.

Before his death, Ungerer had begun working with University College Cork to establish a representative archive of his life’s work in Ireland, to complement the collection held by the Tomi Ungerer Museum in Strasbourg. This archive will facilitate research and exhibitions of his Irish-made works into the future.