Obituary: Ann McKernan health was damaged by her familly’s ordeal but she continued to help her brother battle with the demons 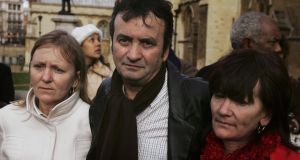 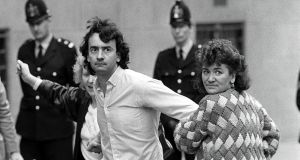 Ann McKernan with her brother Gerry Conlon, one of the Guildford Four, after his release from the Old Bailey, London, in October 1989. Photograph: Peter Thursfield

Ann McKernan, who has died at home in her native Belfast, was a housewife and mother of four from west Belfast who did extraordinary things. First she was a campaigner for her brother, Gerry Conlon, one of the Guildford Four, and her father Guiseppe Conlon, wrongly imprisoned in the same case.

After her brother’s release she juggled the difficult tasks of helping him in his campaigning work while supporting him as he wrestled with his demons. After his death four years ago she continued his campaigning to bring out the truth of the Guildford bombing. Before her death she handed that campaign over to her older sister, Bridie.

She was 15 when her brother was arrested in an army raid on the family home. This was a time when army raids on homes in West Belfast were common. Events became traumatic when he was taken to England and charged with the murder of five people in the bombing of a pub in Guildford, Surrey. Despite being in poor health, her father travelled to London to help his son. Then her father was arrested, with her uncle’s family, and all were charged and wrongly imprisoned, convictions which were later quashed.

Through all, she was fiercely loyal to her mother and brother. After her brother and father were arrested, she left school to help her mother. They saved to raise the money to visit her brother and father in English prisons. As she got older, she became more involved in campaigning, writing letters to any who could possibly help. After her father’s death in prison in 1980, she also campaigned to exonerate him.

When Gerry Conlon’s conviction was quashed in 1989, she found the person released from prison was not her brother, but a different person. He had major difficulties in coping with life. She was one of his rocks as he battled with those difficulties. She also had the ability to be stern with him when necessary.

After his release, he took part in justice campaigns. She also helped in these, accompanying him to America.

When her brother died four years ago she was crucial to continuing his fight for justice for the Guildford victims. He had been working with a soldier injured in the bombing to seek a new inquest. They were seeking the release of over 700 closed files from an inquiry into the Guildford case, held in the British National Archives in Kew.

She was born Ann Conlon in west Belfast in May 1959, youngest of three children to Patrick “Giuseppe” Conlon, who worked in a bookmakers, and his wife Sarah, née Maguire, who worked in the kitchens of the Royal Victoria Hospital. She was educated at primary school locally, then at St Louise’s College.

She was strongly pacifist, and had a deep Christian faith, and a great gift for compassion. The stress of her experiences caused her to suffer brain aneurysms at a relatively young age. She recovered and continued to support her brother and stand up for justice.

Ann McKernan believed the Guildford families deserved justice just as much as the Conlon family, and did not want what happened to her family to happen to any other family. “They’re going through the same hell as me,” she said. “It’s wrong . . . believe me, when I think of my family, I also think of them families. They’re as much victims as we are victims.”

She is survived by her daughters Sarah, Joanne, Mary Kate and Bronagh; and sister Bridie. She was predeceased by her brother Gerry.