Time of my life: ‘Working in a factory was a lesson in life’ 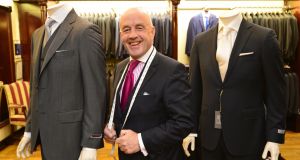 Louis Copeland at his premises on Capel Street in Dublin. Photograph: Frank Miller

After national school I went to technical school on Parnell Square, Dublin. I was there for two years. After that you had to go and get experience. In the meantime I would have been going down to my father’s workshop, sweeping the floor, doing the messages, that kind of thing.

I started out at about 10 years of age doing that. When I left school at 14, I went to tailoring school, learning about textiles. Then I went to work in a factory off Thomas Street, on St Augustine Street, John Barron and Co. Their brand was called Two Owls. I went to work in the factory when I was 16 years old. I’m 68 now.

You had to be in at 8am, and being in at 8am then was like being in at 5am now. I lived in Drumcondra on Grace Park Road. My uncle worked in a printer in Dolphin’s Barn, and he used to collect me at 7.20am every morning. He was one of those old-time workers – everything was to the minute. He’d come up Grace Park Road, you’d jump into the car with him and be there at 7.50am. In those days there was no traffic.

You had to get your card and clock in. If it was 8.05am you had to wait outside in the cold until 9am to get into the place, and then they stopped you and you were late. Later in life that teaches you how to get up early in the morning and make sure you’re in on time.

Working in the factory as an apprentice tailor, you did everything from sweeping the floor to working on a button hole machine. Obviously when you’re a new recruit they’d be playing tricks on you. They’d ask you to “go down to Mary and get a bucket of steam”, and you’d go down looking for one.

You realised later on the value of knowing how a factory works, how the garments are made, what’s underneath the bonnet, as it were. You get to learn all the fabrics, how things are made, all the tricks of the trade. In the factory you started on one thing but were brought around to different things. It was a great learning curve.

Get a lift home

When I finished work in the factory I would have come down to my father and done an hour or two working in Capel Street, and then get a lift home. I was in that factory for about two years. It was all a lesson in the trade for me, but it was also a lesson in life.