Why 'Fat Cat Thursday' is good for top executives, but bad for the rest of us

By the time you come back from lunch today, the UK's top chief executives will have earned more this year than your entire salary 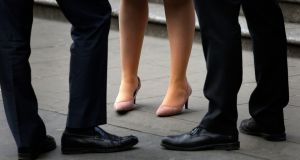 ‘As if to compound the awfulness of going back to work after a festive break there is Fat Cat Thursday’. Photograph: Philip Toscano/PA Wire

There are many reasons to hate January. Blue Monday – reportedly the most depressing day of the day – is a couple of weeks away. Likewise, early January is the time when most long-term relationships hit the skids. And then, as if to compound the awfulness of going back to work after a festive break there is 'Fat Cat Thursday'.

By the time you’ve hauled yourself into work, grabbed a lukewarm coffee, made small talk with the receptionist and put a few hours in at the grindstone today, a handful of aforesaid 'Fat Cats' will have earned more than your annual salary.

Fat Cat Thursdays is so called because on an hourly basis, top executives will have earned more in fewer than three working days – 24 hours of work - than the average employee will pick up for the whole of 2018. At an average of £898 (€1009) an hour, they earn around 256 times what apprentices can expect on the minimum wage.

You do have to wonder about the psychological effects of earning such eye-watering amounts of money, not least compared to everyone else. Does the exec who came from humble beginnings and who hauled himself to the top with grit and guile get dogged by impostor syndrome? Does the privately educated posho, ostensibly in his rightful place on the food chain, become infantilised because he can pay everyone to do everything for him? According to psychologist Paul Piff, being obscenely rich isn’t necessarily good for character. In the main, we rationalise advantage and wealth by convincing ourselves we deserve it.

“As a person’s levels of wealth increase, their feelings of compassion and empathy go down, and their feelings of entitlement, of deservingness, and their ideology of self-interest increases,” Piff sais in a recent TEDx talk. Through surveys and studies, Piff found that wealthier individuals are more likely to moralise greed and self-interest as favourable, are less likely to be prosocial, and more likely to cheat and break laws if it benefits them.

And what of the psychological effects of austerity on lesser-paid workers, or the effect of ongoing financial stress and depression? Many address or internalise such inequality by simply reducing their expectations in life. In some ways, many live in a post-aspirational society, with people careful about what they can hope for. The gap between the top tier and everyone else has become so pronounced, that to dream of crossing the divide into the super wealthy is the stuff of fantasy.

The hard-to-stomach irony is that it’s precisely these apprentices and workers that form the scaffolding to most businesses. Where zero-hour contracts, wage cuts and general job insecurity are rife, the impulse is to wave away the ongoing hum of anxiety and work even harder: make oneself indispensible and integral to the cog. No such concerns for top executives, whose jobs are relatively more secure.

We’ve all had the boss far removed from the realities of the day-to-day workplace. We’ve worked under the person whose own effectiveness and workplace performance is propped up precisely by a cast of dozens. And it’s hard to stay motivated in this environment. By their very nature, elites are out of touch with everyone else. How one is expected to be an efficient boss under those circumstances, it’s hard to tell. Researchers from Lancaster University’s management school have even put the kibosh on the idea that well-paid executives are highly specialised or efficient. They found that returns on investment from major companies amounted to just one per cent in a decade despite senior executives enjoying pay rises of more than 80 per cent over the period.

In a wider sense, it’s very often the carers and protectors who really struggle with the realities of financial survival. What about the qualified nurses, teachers and gardaí who are societal bedrock, and who expend much of their energies on worrying about bills, mortgage repayments and childcare costs?

The pay gap affects society in myriad ways.  Discontent with the ruling elite has long been mooted as a major factor in the voting of both Brexit and Trump. Research has also shown that countries with high levels of inequality also report higher levels of mental and physical ill health, violent crime, teenage pregnancies, poorer education and lower levels of trust in each other.

There has been talk of pay cuts or pay caps among the 1 per cent elite; in the UK, the Co-op group’s head, Richard Pennycock, asked for a pay cut. It will take more than snips to seven-figure salaries to make employees feel more valued, mind. And putting the genie back in the bottle is probably impossible. For now, however, Fat Cat Thursday looks set to run and run, and make January even more miserable for the rest of us. When it comes to the haves and have nots, never the twain shall truly ever meet.

Do headstands, clear out a junk drawer, have sex: 15 ways to re-energise your day
6