In praise of partners who pick up the pieces: ‘he found me on my knees sniffling like a child’

Laura Kennedy: My mother used to say that mugs were vulgar, and that the tea didn’t taste the same in them 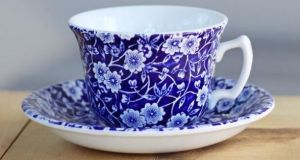 ‘I inherited her dishes when she died. They are Burleigh’s Blue Calico pattern’

Always, he puts the tea in a teacup. Always in a cup, with a matching saucer. A mug won’t do. My mother used to say that mugs were vulgar, and that the tea didn’t taste the same in them. Something about the milk-to-tea ratio. It was hardly scientific, but if you hear something enough . . .

I inherited her dishes when she died. They are Burleigh’s Blue Calico pattern – a rich, inky indigo blue with small flowers that dance along little leafy vines. It took her a few years to accumulate them. They are mostly seconds – they sell the ones marred by mistakes more cheaply than the perfect ones. They would come in the post, carefully nestled in paper and bubble wrap but with a little splodge of blue where it shouldn’t be, or a smudged flower bleeding, panicked, into one of its neighbours, its centre the “O” of a scream. Someone’s irrevocable lapse in concentration. A slipped wrist at the wrong moment; a weary finger rested and imprinted for the breadth of a breath and also for all eternity on the bottom of a cup. You’d barely notice the errors. You’d have to look carefully, but you would find them like tiny, utterly human surprises if you examined the dishes.

When a person is gone, we seek them in objects. He seemed to know it when he found me there

I wept the first time I dropped one of her cups. Everything slowed as it floated almost outside time toward the unrelenting resentment of the kitchen floor. It exploded into bloom like a flower opening itself to the world, and he found me on my knees, sniffling like a child because though I was cleaning up the mess, I was actually picking up shards of the anima that inhered in the cup. When a person is gone, we seek them in objects. He seemed to know it when he found me there. He helped me to pick up the pieces. He glued them back together, and then he made me a cup of tea in one of the remaining cups. A small, thriving succulent lives in the broken one now, sapping life from its cracks and crevices on the window sill, taking vigour from ruin and flourishing like the butt of a joke.

Always, he gets tea in the saucer. Always in the saucer. You will pick up the cup and the rim on the bottom will fling dark, speckled drops of tea at your lap. I wonder how he does this every time. A cup sits by me now, seething gently. I have broken others of my mother’s cups since the first one. Each time, a small but disproportionate despair seizes me. He knows it. Replacement cups began to appear in the cupboards. He didn’t say anything about it until I asked. “Not replacements,” he said, “just . . . protecting the legacy.” Each new cup will weep tea onto my lap from the saucer it swims in.

Four years of being carefully shadowed by a large and gentle presence, more patient than I deserve

Today it is four years, of kindness and drowned cups and picking up the pieces. Four years of being carefully shadowed by a large and gentle presence, more patient than I deserve. I have stopped throwing my eyes to heaven each time I receive a cup immersed in a saucer of tea; I am lucky to have him.

Familial relationships are not volitional. Only death could steal my mother away, leaving those who loved her to gather the shards and glue ourselves back together. But he is here of his own free will, and has been for four years. I wonder at times if it will last till 20, or beyond, if one of us is not stolen from the other, or leaves of our own free will. I wonder if it will not last – new roots could find the cracks and split the thing apart. What we have formed together is hardy, but ultimately tender. Volitional relationships; the ones in which we fasten ourselves to someone else with nothing more than trust in their character and hope for the future, without blood or the obligation of legacy, are the most frightening. Four years is no time at all, and it is an eternity. It is three thousand cups of tea sitting immersed in saucers, and three broken cups, and a promise as optimistic and vulnerable as a new plant bursting from the ruins of a broken receptacle.