People who live on the edge of the world know there are no borders, only love 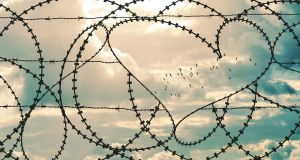 Whether the singer was British or Irish, Muslim or Christian mattered little in the session. He was one of us because he sang

On the last day of the year, I was staring at the lake, savouring the best moments of 2017 and wondering what to do in 2018 to retain my inner peace and avoid any more depression. Gazing across Lough Allen, five kilometres wide, I could see the lights of Ballinagleara, and I was reminded of an afternoon I spent over there in a pub, a few months earlier.

It was a small bar and grocery shop, selling bread and milk from one counter, and pints of Guinness and beer from another counter, with the two spaces joined by a glowing stove.

The autumn sun was slanting in the windows and a session was in full swing. Fiddles lying in the corners, with guitar cases leaning like decommissioned Kalashnikovs against the wall and accordions on the counter.

I had come to hear a singer, Muhammad Al-Hussaini. When I walked in he was leaning against the grocery counter, his eyes closed, his lips reciting verses of a song he’d soon be singing.

Muhammad is not just a British Muslim. He is also an Imam of the Muslim faith. But those are only labels. When he sang he was transformed. He became an angel. From the moment he opened his mouth I knew the afternoon was going to be wonderful.

Whether the singer was British or Irish, Muslim or Christian mattered little in the session

Muhammad learned his singing from old men in Connemara and Camden Town.  In his youth he studied ancient Islamic chant, but in recent years he became attracted to Gaelic sean-nos. And when he took the floor and began to sing, he seemed entirely at home with all the sorrow and subtlety of the old love songs. He spread them before his audience like the cloth of heaven, and we were enthralled by every grace note.

After the singing, a man from Glangevlin rose to his feet. A tall imposing figure, towering above others, and in his large hands he held a box containing an ornamental clay pipe, to be presented to Muhammad on behalf of local singing groups as a token of their appreciation.

What surprised me was that the Glangevlin man spoke in Arabic. Because he wasn’t just another local who happened to love songs. He was also a well travelled individual, who worked for decades with oil companies and had rubbed shoulders with many people all across the Arab world, before finally retiring home to Ireland.

After speaking some phrases in Arabic, he turned to English, saying with understated eloquence how he loved those far off lands.

And he invoked the names of those places with the same affection as if they had been villages up the road. As if it were from the peoples of Gobaveeny or Coratavy that the bright Imam had sprung.

Then there was a pause. A moment pregnant with political innuendo. A sense of deep sorrow for all the carnage that has been inflicted on those places since the British and Americans began their most recent invasions and adventures.

“I saw how beautiful those places were,” the Glangevlin man concluded, “but that was before all the trouble.” And he offered no further elucidation.

Instead, he spoke in Arabic again, handing the gift to Muhammad, and in prayer, showering the blessings of Allah on the singer, on the musicians, and on all of us.

And no further word of politics was heard beneath the low ceiling of the old pub that afternoon. Because it wasn’t a place for politics. Whether the singer was British or Irish, Muslim or Christian mattered little in the session. He was one of us because he sang. Because he opened our hearts to the subtleties of love in our own songs. And my eyes were watering.

“If only the world were more like Ballinagleara,” I thought.

Because for people who live on the edge of empire, there are no borders. There are only more villages and more places of shelter, further down the road. Borders are merely random lines drawn by insane generals or power hungry politicians who would divide a single river into separate currents if they could.

But people who live on the edge of the world know better. They know that there is only love at the heart of things. And that music travels from mouth to ear and from ear to mouth. Or as Beethoven said, from heart to heart. Like it does in south Ulster, from one side of the house to the other, a thousand times a night.

Dining out: 12 of Dublin’s best restaurants with outdoor spaces
6

Nuala O’Faolain, a feminist whose happiness was often tethered to men
10