There’s no need to be scared when things end 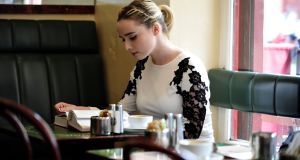 Laura Kennedy. ‘Today, this column comes to its end, but it isn’t the type of ending I used to be so frightened of.’ Photograph: Aidan Crawley

Habits formed in childhood are difficult to break, but the sort of tremulous anxiety instilled by poverty is more than a habit. It is something deeper than fear; closer to a realisation too early in life, before the mind is capable of contextualising it, that you are intensely vulnerable to harm and loss, and that the adults around you, who should be an indomitable barrier between you and the wide world beyond, cannot always protect you.

Even love cannot always protect you. That fear is a learned lens through which the world is seen, and you can no more will it off than you can forget the muffled sound of your mother’s crying filtering up the stairs as she sits alone over a stack of bills she knows she cannot pay. You lie in bed listening, small and wholly without power, and you learn bleak lessons about what the world is like to live in.

As a child, I was frightened of endings most of all. They always seemed to emerge unbidden from patterns that I couldn’t read. As a result, they felt to me like cruelty, or some sort of punishment, so I learned to develop an unconditional expectation of the end. It would come anyway. Even if you can’t read the pattern, it doesn’t take a genius to see how things will go, sooner or later. If you hang in there long enough and have a total lack of faith in yourself and others, your worst expectations will always be proven correct. This approach is not good for anyone, but it is reliable as the tide, and when you come from unreliable circumstances, that can be enough.

I was well into adulthood before I realised that endings are not inherently bad. Neither are they more valid than any other part of a process; they just tend, in retrospect, to be the most recent part.

I have been writing this column in some form or other for a little over five years. It began in my mid-20s, when I was socially incompetent after years of elective celibacy (Google it; I’m not heading back there) with my head in a book. After discovering that I was so hell-bent on getting away from where I began that I lacked basic skills such as “having fun” (whatever that is) and “talking to men”, I embarked on a column called The Yes Woman. Despite being deeply self-conscious and unadventurous, I found myself trying something new each week for a year, and writing about it for The Irish Times. At the close of that year, my mother was diagnosed with terminal cancer at 57, and I wrote about that awful time; that ending I feared above all endings.

When she was gone, I set about figuring what life looks like the day after your worst fear comes to pass, and each day after that, usually with the guidance of the only influence in my life that can rival my mother’s and the only thing (apart from her) that finally did lift me from the circumstances of my childhood – philosophy. To do this in the pages of a newspaper that seemed to me as a child like something from another world is beyond what I ever anticipated.

Today, this column comes to its end, but it isn’t the type of ending I used to be so frightened of. When you grow up in poverty that fear keeps your mind perpetually off the present, casting it backward in longing, resentment or regret, and pitching it forward in dread. You understand yourself to be cosmically vulnerable, and all change to be further confirmation that you are not in control of your life.

Through this column and the people who read it – the emails I receive each week, and the tremendous goodwill it has brought into my life – I have learned to relax the grip of that anxiety, and realised there is no need to be quite so afraid. At least, no more than anyone else. Here is the closing of something that taught me to appreciate the present, and the people who populate it. There is nothing to fear in the end of something that showed me a good in the world I could never have seen without it.