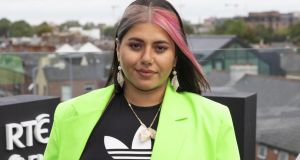 Tara Stewart: with her customised clothes and bright streaks in her hair, she has the stance of an extrovert, but behind this public persona is an unexpected shyness. Photograph: Kinlan Photography.

As rain lashes down in Donnybrook in Dublin on a dark, cold Monday night, the RTÉ radio centre is, as it tends to be in the evenings, quiet. 2fm DJ Tara Stewart is beginning her show with a track by the British DJ Patrick Topping.

RTÉ can sometimes appear wary of new voices, but Stewart, a 29-year-old woman who grew up in Alice Springs in Australia, has broken through in recent months, securing a two-hour music show, propelled by a busy DJing schedule outside the station.

Her rise and her taste for R&B and hiphop have coincided with the growth of the genres in Ireland. Stewart’s Rap Hour, which makes up half her show, is often dominated by Irish acts, inconceivable a few years ago.

Sitting in the studio in a Spiceworld sweater (she saw Mel C with Sink the Pink at the Academy in Dublin the previous weekend), Stewart adjusts her chair, clears her throat, and gets going. She always starts the show “with a pumper”. The playlist veers between genres. This evening there is Blood is Blood by Gold Blooded Woman, a new Foals track, Just Mustard, and Denis Sulta. Her track of the week is Shoulda Been by Irish-Scottish duo SIIGHTS.

The radio presenters she admires include Annie Mac, Phil Taggart, Louise McSharry and Tracey Clifford. The latter two offered Stewart her two big breaks on 2fm. With Clifford, she began an entertainment news segment, and covering McSharry’s maternity leave led to Stewart securing her own show.

Stewart, with her customised clothes and bright streaks in her hair, has the stance of an extrovert, but behind this public persona is an unexpected shyness. She is not beyond going to the bathroom to cry in work if she screws up a booking or forgets to reply to an important email. “I can’t cope with criticism. I’ve been trying to work on that my whole life,” she says.

This aversion is probably rooted in playing music. Stewart played seven instruments growing up: saxophone, flute, accordion, mandolin, drums, piano and guitar. “You had to be criticised all the time. You always had to improve. Every week having a lesson, I’d had to be really good, I’d have to practise and hope that he’d say ‘That sounds really good!’”

The goal was always to be a musician, a future her parents (her father is from Belfast, her mother Malaysian Indian) were enthusiastic about. Stewart left Australia to move to London to pursue a music career, but stopped in Dublin along the way and ended up staying because she liked the city. She performed in bars with her band, but the graft wasn’t yielding the results she wanted. Five years ago, over Christmas with a friend’s family in Edinburgh, she realised her answer to a repetitive question – “so, are you still doing the music?” – was a deflated “yeah”. She began to question why she was still doing something at 25 that she had lost her passion for.

“I almost got signed to Sony when I was 14. I almost got a publishing deal when I was 18. All these small things were always ‘almost’. It’s not fair for me to say it was an age thing anymore – 25 wasn’t old – but at the time I thought I was too old to do it, which isn’t the case. It was more so that I didn’t like doing it.”

Encouraged by radio DJs Dara Quilty and Steve K, Stewart sent a demo to 2fm’s then director of sound and music, Mark McCabe. He passed it to Adam Fogarty in 2XM, the station's digital channel, who brought her in and trained her up. She began presenting a show called Pop Tarts, eventually earning a slot on Tracey Clifford’s show. (Stewart's boyfriend is now the rapper Karl Mangan, who performs with Fogarty as the other half of  Mango x Mathman.)

Stewart recalls her nervy first show. “I was shaking. I hit the sting ‘Tara Stewart on 2fm’, played the first song and started crying.” Three years later, the nerves are gone, and she’s beginning to put her stamp on things.

In an era where social media can embed a broadcasters’ identity and widen their reach, building an online persona has been a central part of Stewart’s career, but she is more relaxed about it now than she used to be. “I still care about having nice photos, but I’m not like ‘I need to have this many outfit posts this week, and I need to be like this, and the lighting needs to be like this.’”

Her stint promoting clothing for a fast fashion brand was part of another awakening. When her friends started the Sustainable Fashion Dublin project, Stewart was forced to rethink her association with near-disposable clothing. She was embarrassed that she didn’t know anything about sustainable fashion. Her blind spot, she says, was probably down to “who I was following, and who was in my sphere, and what news sites I was reading. It’s scary when you think about it.”

She made the call to end the deal, an act of sacrilege in an industry where relationships with brands are part of one’s professional and personal clout. The brand was not happy. When they impressed upon Stewart that she still had four sponsored social media posts to do, that had already been paid for, she offered to return the money. “They gave me the bank details and I lodged the money back into their account . . . It made me realise, they’re not my friends. What made me think they were my friends? It’s all business, and that was a big lesson for me.”

Such lessons are harsh, but the broader one is learning to stick to your guns. For now, Stewart can let the “almosts” of the past rest, and just keep on playing those pumpers.