A simple panna cotta – with a distinctly Irish twist

What gives the Italians a hold on this set cream dessert? 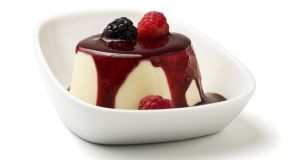 Panna cotta: I love to use buttermilk to give it an Irish twist. Photograph: iStock

A panna cotta is an Italian dessert of “cooked” cream with sugar, gelatin and various flavours such as vanilla, fruit or coffee. But what gives the Italians a hold on this set cream? Does not every culture have some type of cream pudding?

We have our own of course. It’s made with seaweed, aka carrageen moss. Though Myrtle Allen made this one famous in her restaurant in Ballymaloe, it existed well before her. A recipe is included in Florence Irwin’s The Cookin’ Woman: Irish Country Recipes (1949).

Seaweed is not for everyone, which explains the popularity of gelatine for making panna cotta. However, there are powdered seaweed alternatives such as kappa that are derived from carrageen. Traditionally, panna cotta is made with one part cream and one part milk – though, I love to use buttermilk to give it an Irish twist.

Vanilla is the basic flavour component but for a further Irish twist I like to add dried wildflowers meadowsweet or woodruff. Ground pine is also another nice addition but be careful as it’s strong stuff. Less is more. Any sort of autumn stone fruit will pair well with panna cotta, such as plums or apricots.

To make the panna cotta:
Heat 250ml of cream and 250ml milk in a pot with 75g of sugar and 1tsp of vanilla essence (or half a vanilla pod). Bloom three gelatine sheets in cold water for a few minutes until soft. Remove the warm mixture from the hob and add the gelatine. Whisk until the gelatine is dissolved. Pour the mixture into four greased containers and set in the fridge for four hours.

To make a quick plum sauce:
Stone four plums, quarter them and weigh them. Add the same weight in water and sugar and heat in a small pot until the plums soften. Blend and pass through a fine sieve. Add a splash of dessert wine and chill.

To serve, pop out your panna cotta and pour the plum sauce around it. Decorate with a few viola flowers and some fresh plums pieces, if desired.