Sylvester Ryder obituary: ‘Proud son of the Liberties’ with a talent for music

Lives lost to Covid-19: Dubliner remembered as a 'great character' and 'entertainer since he was a child' 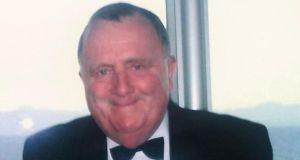 Sylvester Ryder played the pubs and clubs of Dublin throughout the 1970s, 80s, 90s and up to and including the noughties

Sylvester (‘Silver’) Ryder was one of 13 children – seven boys, six girls – who grew up in Dublin’s Liberties. He was born there at Carman’s Hall in 1937, he and twin brother Tony. As daughter Valerie O’Hanlon recalled at his funeral, about his familiarity with the area, “he knew every nook and every cranny, every street and every laneway and he loved nothing better than to show off his knowledge and memory about the streets of Dublin”.

He was “a proud son of the Liberties and of Dublin, though we did all get a shock when we checked the 1911 census to find out his grandfather had been born in Co Kildare. He wasn’t as true a Dub as we all thought,” she said.

Music was one of his great passions. As a young lad, he studied piano and accordion at the College of Music on Chatham Row in Dublin, while he and Tony performed as a duo and in pantomime at the Olympia Theatre. While still in his teens, Silver went to the United Kingdom, performing in working men’s clubs there and later with Fit-Up Travelling Theatre companies back in Ireland.

It was while back in Ireland in the later 1950s that he met Patsy McCarthy, also from the Liberties area of Dublin. They married in 1959, when she was 19 and he 22, and hit off for the UK again. It was while he was performing in Beverly, Yorkshire, their first child, Beverly, was born.

Back in Dublin again in 1962 they had five more daughters: Deborah, Audrey, Pat, Valerie and Rachel.

Silver played the pubs and clubs of Dublin throughout the 1970s, 80s, 90s and up to and including the noughties, including with his old friend, the late Sonny Knowles. He also played with the Guinness Jazz Band and at the Cork Jazz Festival. A life-long member of the Irish Federation of Musicians, he become an executive board member.

“At the heart of Daddy was his music,” said Valerie at the funeral. He also liked a pint, his food, and had “a terrible sweet tooth”.

He “loved to travel, and himself and Mammy were everywhere, cruising through the Panama Canal, sunbathing in the south of France, seeing Frank Sinatra in the Royal Albert Hall, or enjoying the atmosphere of Las Vegas. He visited Chicago many times to see my sisters Deborah and Rachel and even brought his jazz band to London one year to perform at a Christmas party for Beverley,” she said.

He and Patsy had been married for almost 60 years when she died in September 2018. “Mammy looked after him with all her heart. They travelled the world together. He missed her terribly when she was gone,” recalled Valerie.

He was “a great character, an entertainer since he was a child”, she said. Latterly he had suffered with type 2 diabetes and, while being treated for an infection, he contracted coronavirus. He died at St James’s Hospital, Dublin, on May 15th.