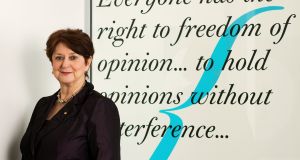 “I felt from the youngest possible age that it was unfair, intolerable really, that females were regarded as second-class citizens,” Ryan said in 2017. “That was going to be the big thing that I wanted to change.”

Ryan had Irish roots on both sides of her family and they went back as far as her great-great grandfather, William Stafford, who in 1829 was transported to New South Wales from Wexford, having received a seven-year sentence for larceny.

Born in Camperdown, then a working-class suburb of Sydney, on October 10th, 1942, Ryan was the daughter of Florence and Francis, a sales assistant and a public servant. She was educated by the Brigidine nuns and spoke of how her Catholic education lit in her the fires of feminism and social justice. In later years, the influence could also be seen at social events as she moved seamlessly from singing a hymn to belting out The Internationale.

The first in her family and school to win a scholarship to the University of Sydney, she was forced to pay back the scholarship money because she had married – Ryan was told she would have to pay back the money she had received when the principal of the teachers’ college saw her engagement ring.

She moved to Canberra due to the career of her then husband, diplomat Richard Butler, and it was there she became active in the Australian Labor Party.

Her talents were spotted early, and she was elected to the Australian Senate in 1975. Ryan made quick progress: she was appointed to the party’s front bench in 1977, and on the election of the Bob Hawke government in 1983, she became Labor’s first woman cabinet minister, in the portfolio of education and the status of women.

In her time as minister, two achievements stand out – the passing of the Sex Discrimination Act in 1984, which included outlawing sexual harassment (making Australia the first jurisdiction to do so); and her work ensuring that more Australian teenagers stayed on in education. By 1996, students going on to year 12 (the equivalent of advancing beyond Junior Cert) had increased from three in 10 to nine in 10.

After leaving elected politics in 1987, Ryan became publishing editor for Penguin Australia. She remained involved in human rights causes, headed the Association of Superannuation Funds of Australia, served as a pro-chancellor of the University of New South Wales, and was briefly deputy chair of the Australian Republican Movement

Ryan returned to public life in 2011 when she was headhunted to serve as the age discrimination commissioner, and then added disability discrimination to her roles at the Human Rights Commission in 2014.

Among the reasons for Ryan’s success throughout her career was her ability to marry principle and pragmatism, and she was always prepared to roll up her sleeves to get the job done. Ryan was also an important mentor to other Labor women, most notably former deputy leader Tanya Plibersek, and Senator Deborah O’Neill, one of Australia’s most senior Irish-Australian politicians.

She is survived by her partner Rory Sutton, her two children, and grandson.