Secrets of an intensive care doctor: 'I've been called a murderer'

How do you tell someone they’ve less than a 6% chance of survival? 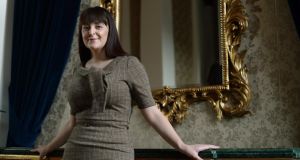 There are few jobs that place you on the frontiers of human existence: midwives see lives into the world, undertakers oversee their departure. In between these beginnings and endings, surgeons, doctors and nurses interact with people at varying stages of illness, and often witness people at their most vulnerable.

Dublin-born Aoife Abbey is part of this cohort of people. An intensive-care doctor at University Hospital Coventry, in England, the 35-year-old will come into contact with more critically ill people in a month than most of us will in our whole lives.

For almost two years, she blogged about her work experiences as the anonymous “Secret Doctor” for the British Medical Association (BMA). Abbey was the second such practising junior doctor to hold the role. “The idea was a bit like the Secret Footballer,” she says, over coffee in a Dublin hotel. “To give people an insight into the daily goings-on of the medical world.

As the BMA explains on its website, there was nothing new about medical professionals writing anonymously about their experiences, but social media meant that the reach of these pieces gave a much wider readership than ever before. Abbey’s blog posts were read by tens of thousands of people. “I could write anything I wanted, as long as there was no gratuitous black humour.”

A woman her own age had “the worse possible kind” of brain tumour: fatal with a five-year survival rate of less than 6%

The piece she acutely remembers writing was about breaking the news to a woman her own age that she had “the worse possible kind” of brain tumour: fatal with a five-year survival rate of less than 6 per cent. But how to break this harrowing news? Abbey writes in Seven Signs of Life: Stories from an Intensive Care Doctor, a book she has written about her experiences: “Why had she not asked the oncology team? For some reason she had chosen to ask me instead, and now I was sitting in a room with her; with her fear and mine.” The young woman subsequently lived for less than two years.

A publishing company came to her last year with an offer to write the book from these short online reflections on the many challenges facing an intensive- care doctor. When she agreed to write it, she had to surrender her anonymity and give up the Secret Doctor role.

The book is divided into seven sections, which Abbey considers best reflects the range of the work she does: “Fear”, “Grief”, “Joy”, “Distraction”, “Anger”, “Disgust” and “Hope”. (The story about the young woman with the fatal brain tumour is in the section called “Fear”.)

“I would like anyone to be able to pick it up and understand more about the work I do,” she says.“ I wrote this book knowing I was unfinished, and only seven years into a very long career. It’s a record of where I am now, faults and all,” she explains, aware that some people may think she is still short on experience to write a book about working in intensive care.

Abbey grew up in a household where hospital work helped pay the bills: her mother is an emergency-department nurse. She also learned a lot about people’s attitudes to disability. Her brother Aaron, who died last year, was an activist for disability rights and a campaigner for the Independent Living Movement. “From him, I learned the difference between medical disability and social ability. It gave me exposure to things you don’t necessarily get taught in medical school,” she says drily.

Abbey always wanted to be a doctor but, like many people, worried she would not get the points for medicine. When she failed to get them first time, she repeated her Leaving Cert, missing out on medicine by just five points. Instead of giving up, she went to Edinburgh University for four years to study biological science, and then went on to Warwick Medical School for another four, graduating in 2011.

An intensive -care doctor carries out medical procedures that most of us, given a choice, would prefer to remain in blissful ignorance of. Every day, they are intubating and ventilating patients; examining X-rays that reveal horrible truths; operating and then hypothesising the quality of life the patient will have after the operation. How does one begin to practise such skilled and delicate physical procedures?

“The saying is, watch one, do one, teach one,” she says. Student doctors in intensive care watch first. When they attempt something for the first time, they are supervised closely. (And yes, Abbey says that patients are sometimes told it is the first time the junior doctor is doing this particular procedure.)

She admits to being nervous when she carried out her first tracheotomy, even after having watching it being done some four or five times previously. “You could accidentally puncture someone’s lung,” she says matter-of-factly. “But it is easy to concentrate. You are just focusing on the moment. The deal is that we speak to each other in the team. You get to be very specific about the bit you are doing.”

Medical and surgical procedures are one thing, but communicating bad news to patients and their families requires an entirely different set of skills. “It is not like the way hospital emergencies are portrayed in TV dramas. They focus on the emotional drama. They have patients who have undergone CPR, who are up and awake next day,” Abbey says. “What television dramas don’t capture is the huge uncertainty that comes with working in intensive care.

“If our patients don’t die, they often have a long road of recovery ahead of them, with many long-term implications down the line. Most of our patients do survive, but what they face afterwards is often difficult. And I have to say to families, ‘The person is still alive, but I don’t know what alive is going to look like in the long term.’”

Medical practitioners cannot effectively function if they become emotionally engaged with their patients – people who are, in fact, total strangers to them. But doctors are not robots, and breaking dreadful news to people, no matter how often you do it, is possibly the least enviable job in existence. “Intensive care is a hotbed for delirium,” Abbey notes, in the “Anger” section of the book.

Over the course of her career, she has watched countless people die. 'I've been called a murderer,' writes adding she has been spat at, hit, insulted and challenged, both by her patients and by members of their families. She writes about all of these things in the book, and acknowledges the burnout that can affect those working in such highly pressured scenarios. “I hope medical students might read the book too,” she says. “It might help people to talk about things; to deal with the issue of burnout that is prevalent in the profession at the moment.”

Abbey has witnessed burnout herself in the most visceral way possible for an intensive-care doctor: by attending a trauma patient who turned out to be a doctor from a neighbouring hospital, known to the staff in the room. He had made a suicide attempt. “Standing over his head that morning, I felt panic like I had never felt beside a patient before,” she writes. This was one of her own.

It’s among the most memorable passages in a thoughtful and necessary book about a world all of us might inhabit at some point in our lives.

Seven Signs of Life: Stories from an Intensive Care Doctor, by Aoife Abbey, is published by Vintage

Calm down covidiots, it’s nothing personal
9