Channing was hardly ever out of the spotlight on stage, tv and film until well into her 90s 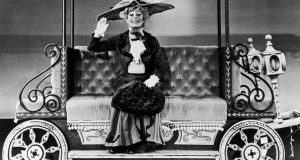 With her huge, saucer eyes, elastic smile, gravelly voice and buttercup hairdo, Carol Channing, who has died aged 97, was a favourite of caricaturists, impersonators and drag acts. Behind the flamboyant facade, however, was a real stage trouper who missed only one performance out of almost 5,000 during her original stint on Broadway (1964-65) and years on the road and in revivals as the matchmaker Dolly Levi in the Jerry Herman hit musical Hello, Dolly! She used to tell her understudies: “Don’t worry about learning the part. You’ll never have to go on.”

Although Hello, Dolly! was originally written for Ethel Merman, who turned it down, and was played subsequently by dozens of celebrated performers including Merman, none of them was better than Channing. (Barbara Streisand in the 1969 film version was far too young in the role.) The show won 10 Tony awards, including one for Channing, who gained rave reviews. The New York Daily News proclaimed her “the most outgoing woman on the musical stage today – big and warm, all eyes and smiles, in love with everybody in the theatre and possessing a unique voice ranging somewhat upward from a basso profundo”.

From her big break in the Broadway revue Lend An Ear (1948), in which, according to one critic, “the wide-eyed beauty displayed her fabulous comic talents and vocal abilities”, Channing was hardly ever out of the spotlight on stage, television and film until well into her 90s.

She was born in Seattle, Washington, the only child of George Channing, a newspaper editor, and his wife, Adelaide (nee Glaser), who were both active in the Christian Science movement. After attending high school in San Francisco and Bennington College, Vermont, where she majored in drama and dance, Channing landed a job understudying Eve Arden in the Cole Porter musical Let’s Face It! (1941) on Broadway.

After touring on the nightclub circuit, she returned to Broadway in Lend An Ear, playing several parts, most notably as an over-energetic chorus girl in a spoof of 1920s musicals.

This led to her being cast in the musical Gentlemen Prefer Blondes (1949-51), set in the 1920s. As the gleefully scheming Lorelei Lee, who wants to marry a sugar daddy, Channing stopped the show with Diamonds Are a Girl’s Best Friend.

According to Brooks Atkinson in the New York Times: “She goes through the play like a crazed automaton – husky enough to kick in the teeth of any gentleman on the stage, but mincing coyly in high-heel shoes and looking at the confused world through big, wide starry eyes. There has never been anything like this in human society.” Channing was much closer to the character in the novel by Anita Loos than the guileless and vulnerable performance of Marilyn Monroe in the updated 1953 movie version.

After a long run as Lorelei, Channing toured in a summer stock production of Pygmalion (1953) – she had studied George Bernard Shaw at university – before being back in her element (replacing Rosalind Russell), singing and dancing, on Broadway in Leonard Bernstein’s Wonderful Town (1953-54). In 1959, she starred in Show Business, an extended version of her one-woman nightclub act, in which she did a hilarious impersonation of Marlene Dietrich.

It was not long before Channing was to embody the role with which she would always be associated. The life-loving Dolly Levi, a middle-aged widow, a matchmaker, schemer, meddler and opportunist, decides it is her turn to get married – Before the Parade Passes By – and chooses Horace Vandergelder, a wealthy, elderly skinflint. The show, based on Thornton Wilder’s play The Matchmaker, opened at the St James theatre, New York, in January 1964.

She had started a parallel career on television, making guest appearances on almost every variety show in existence for hosts such as Perry Como, George Burns, Carol Burnett, Dean Martin, Dinah Shore and Red Skelton. However, she made very few feature films, perhaps because her exuberant personality was unsuited to the cinema. Nevertheless, she made an impression in her first credited big screen role in The First Traveling Saleslady (1956) set in 1897 Texas. As the friend of the eponymous saleswoman (Ginger Rogers), Channing gets to belt out A Corset Can Do a Lot for a Lady and to seduce a cavalry lieutenant (the young Clint Eastwood).

Some years later, now even more famous in the US for Dolly Levi, Channing landed her best film role in the 1920s flapper-era lampoon Thoroughly Modern Millie (1967) for which she was nominated for an Oscar as best supporting actress. As the eccentric socialite widow Muzzy Van Hossmere, shrieking “Raspberries!” at odd moments, singing I’m a Jazz Baby and doing a tap dance on a xylophone, Channing steals the picture from Julie Andrews (in the title role), Mary Tyler Moore and Bea Lillie.

In Skidoo (1968), Otto Preminger’s curious attempt to satirise the 1960s psychedelic culture, Channing sings the title song – a hippy anthem – and does a wild LSD-fuelled striptease for the faded pop star Angie, played by Frankie Avalon.

Back on Broadway, her verve undiminished, she revisited her two signature roles, in Lorelei (1974), a slightly rewritten version of Gentleman Prefer Blondes, and in Hello, Dolly! in New York (1978) and at the Drury Lane theatre, London (1979). When she returned once more to the show in 1995, at the age of 74, Variety wrote: “Certain products of western civilisation exist beyond criticism and the ravages of time: Grant’s Tomb, the Hollywood sign, Carol Channing in Hello, Dolly!” She received a Tony lifetime achievement award that year.

Channing was married four times and twice divorced. She is survived by a son, Channing Carson (who works as a cartoonist under the name Chan Lowe), from her second marriage, to Alexander Carson, which ended in divorce. Her third husband, Charles Lowe, whom she married in 1956, and who adopted her son, died in 1999.

In 2003 she married Harry Kullijian, her childhood sweetheart. Their relationship was chronicled in the documentary Carol Channing: Larger Than Life, which was released in 2012, the year after Harry’s death. Channing’s memoir, Just Lucky I Guess, was published in 2002.