Sean Moncrieff: As a father of daughters, I realise I’m a hypocrite 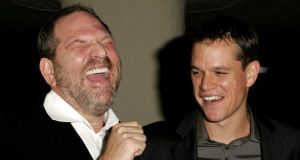 When the Harvey Weinstein scandal blew up, Hollywood types like Matt Damon insisted that this kind of thing had to stop because they have daughters. Photograph: J Vespa/WireImage/Getty

I’ve just realised that I’m a hypocrite. Or, more correctly, that I’ve been having hypocritical notions. That’s not good, but it’s not especially bad, either: we all like to think we’re completely rational creatures, unencumbered by the views pressed on us by our experience, our social standing, our families and our friends. But we’re not. Our brains are a battleground between logic and prejudice, between the way the world is and the way we would like to think it is.

But anyway, my latest hypocrisy stems from the fact that I have daughters. When the Harvey Weinstein scandal blew up, various male Hollywood types, like Matt Damon, lined up to express their horror, dodge questions about how much they knew, and insist that this kind of thing had to stop because they have daughters.

Having daughters meant that they had skin in this game. Having daughters seemed to bestow them with some quasi-qualification in the often grim dynamics of gender relations.

But why should it? Is the corollary of that: I have sons, so I don’t care? Surely they have opinions about many issues to which they have no direct connection. You don’t have to be a Rohingya, or even have met one, to be appalled by the ethnic cleansing in Myanmar. Hundreds of thousands of straight Irish people had opinions, and voted on, marriage equality. Why should sexual assault, or the treatment of women in general, be any different?

The thing is, I’ve done the same. I’ve played the “I have daughters” card many, many times so I could spout off about sexism. On just about any other issue I haven’t felt the need the bring my children into it.

In fairness to me and Matt Damon (me, anyway), bringing daughters into discussions about feminist issues doesn’t necessarily mean we hadn’t thought about them until the kids arrived. It may also stem from a certain tentativeness. For pretty understandable reasons not all feminists want men to roll in with their tuppence worth. They certainly don’t want men to rescue them from sexism. Even the best-intentioned man can’t know what it’s like to move through the world as a woman, so invariably we’re going to get it wrong.

Of all the equality issues sexism is arguably the most pervasive, intersecting with pretty much every aspect of human experience

And it affects men too. A more equal world is obviously better for everyone. But, more troublingly, the recent bubbling of right-wing politics has contained anti-feminism as one of its central components. It argues that all these bolshie women are emasculating men, suffocating them with politically correct strictures that hold them back from their true nature. It’s underpinned by a reductive, biological determinism that views maleness as aggressive, competitive and individual.

This restricted, Old Testament view of what it means to be a man is not only bad for girls but also incredibly damaging for boys.

Matt Damon and I shouldn’t be horrified by the Weinsteins of this world just because we have daughters. But because some of us have sons too.