After his diagnosis with motor neurone disease (MND) and despite being completely paralysed, Simon Fitzmaurice still directed his first feature film My Name is Emily. Video: Ronan McGreevy 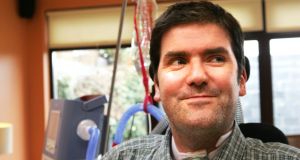 Mr Fitzmaurice, who had motor neurone disease, was aged in his early forties. He is survived by his wife Ruth and five children.

Mr Fitzmaurice was a promising young film-maker with two award-winning shorts under his belt, when, in 2008, he was diagnosed with motor neuron disease.

Ms Fitzmaurice learned she was pregnant with their third child on the same day her husband received his diagnosis. Simon was initially given four years to live.

He went on to beat those odds and to father two more children, twins Sadie and Hunter to join Jack, Raife, and Arden.

The family lives in Greystones, Co Wicklow. Mr Fitzmaurice’s memoir It’s Not Yet Dark, published in 2014, opens with a frank account of the attendant practicalities of a life that requires a motorised wheelchair, a home ventilator, eating through his stomach and communicating through eye-gaze technology.

It’s Not Yet Dark tells the story of his diagnosis with the disease and how it progressed and impacted on him and his young family.

Ms Fitzmaurice has also written about how her family has tried to cope with the diagnosis and living with motor neurone disease for The Irish Times and is also the author of the book I Found My Tribe.

He died on Thursday.