Swedish death cleaning: Put your life in order so loved ones needn’t

Hilary Fannin: Here it’s beaten into us to worry about a clean soul, not a sock drawer 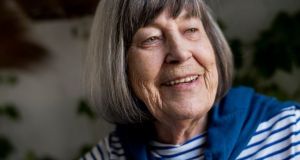 I’ve never been to Scandinavia. I’d like to go. I would, if I could afford to buy a cup of coffee there, or rent somewhere pine-scented in which to lay my head during one of those endless days or unrelenting nights.

When I think of Sweden, that place I’ve never been to, my little heart lights up. I’m partial to fjords, I have a warm spot for geysers, and I’m certainly not averse to the occasional fermented Baltic herring on toast. More importantly, though, I’d really really like to be blonde and own a pair of snow boots.

I reckon I was born to be a Nord. I can see myself living in a terribly clean, red wooden cottage on the Swedish archipelago, eating up my reindeer balls, watching box sets featuring gothic tales of murder and perversion in the pine forest, and having long quiet naps on my modest self-assembled bed dressed in organic cotton sheets. (Could I just clarify here that the bed will be wearing the organic sheets, not me? I’ll be wearing intricately patterned knitwear and waterproof lederhosen, and I won’t be removing the boots.)

I think Sweden would be good for me. It’s a country that could curb one’s tendency to slovenliness. Could one really lie around eating curry chips in front of The X Factor in a country that perennially smells like an air freshener?

Anyhow, just when I thought my unrequited love affair with a society that introduced the gender-neutral pronoun hen to its dictionary couldn’t get any steamier, the Swedes have surpassed themselves. Forget their flatpack invasion or their sparkly-platform-booted, Waterloo-warbling Eurovision legacy, for one moment put aside their genius in proposing a six-hour working day and producing that oddly compelling (if somewhat synthetic-tasting) dill mustard you can buy in Ikea, and open your hearts and eyes to the Swedes’ latest offering to this tired old world: a volume called The Gentle Art of Swedish Death Cleaning.

Described as “a charming approach to putting your life in order so your loved ones won’t have to”, the book, by Margareta Magnusson, is all about döstädning, a Swedish word that literally means, well, death cleaning; that is, cleaning up all your old crap yourself before you pop your clogs (clogs that you probably should have recycled in 1979) rather than leaving it to someone else to do afterwards.

Magnusson reasons that “death cleaning”, when approached with thought and care, makes things easier for family and loved ones, while also allowing you the opportunity to revisit a lifetime of memories accumulated along with your things, while you’re still, you know, breathing.

“I’ll read it when I’m 90,” I told myself (a tad optimistically perhaps), preparing to add the title to all those other books that I’m leaving until I’m a nonagenarian (American Psycho, Ulysses, A Beginner’s Guide to Topiary, Peig). But then I read the blurb, recommending this book for anyone over 50.

Fifty! Hold on a second! I’m 55 and I haven’t even begun to accumulate the rubbish I’ll need to tackle when I’ve finally reached my apotheosis and I’m a tap-dancing multi-linguist with abs of steel and surprisingly little facial hair.

Anyway, as rational and practical and quintessentially Swedish as death cleaning may sound, I think there’s something terribly clinical – too clinical – about it. Whatever about putting one’s affairs in order, there can be something tremendously cathartic about sorting out what’s left behind by somebody one cared for; about finding and holding and saying farewell to the old photographs, the scribbled shopping list, the love letters that have survived a lifetime, the passports that hold some kind of poetry they never did in their days of usefulness, the crumpled tissue in a cardigan pocket, the paperback with the page still marked, the abandoned pocket diaries and dreadful shoes and redolent scarves and sleeping umbrellas and stained cookbooks and postcards sent from drizzling Irish holidays (“Weather mixed, wish you were here”). These small prompts that move us on down the grief line towards acceptance may be more valuable than Ms Magnusson thinks.

If we have an Irish equivalent of döstädning, I’ve yet to encounter it. I suspect our more traditional preoccupation, soundly beaten into us throughout our rain-soaked childhoods, of having a prepared soul and a clear conscience when we come to queuing up at those pearly gates to meet our maker, has somewhat eclipsed concerns about clearing out our sock drawer, no matter what strange delights might lurk in its recesses.