Amy O’Connor on her days as an autograph collector 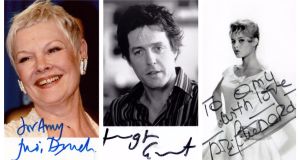 Whenever a celebrity dies, I invariably receive a text or an email from one of my parents asking the same question: “Did you ever get their autograph?” What a weird line of enquiry, you’re probably thinking to yourself.  In my case, however, it’s a perfectly valid question.

You see, some children collect conkers. Others collect Beanie Babies. The more studious child might gravitate towards stamps and insist on referring to themselves as a “philatelist”. But me? I spent my formative years writing to celebrities and asking for their autographs.

It all started when I was 10 years’ old and attended a Six concert in Tramore, Co Waterford. (Yes, Six from Popstars Ireland.) The support act that night was a Lynx-scented, frosted-tipped boy band called D-Side. In an effort to court the largely tween audience in attendance that night, D-Side gathered outside the venue to sign autographs. I got three members of the group to sign a glossy poster and was immediately enamoured. Not with the band, but with the act of acquiring autographs.

I loved it all – the loopy signatures, the “To Amy” dedication, the question of “What if they become really famous and I have to get this appraised on the Antiques Roadshow some day?”

That very night, I started researching how one might go about starting an autograph collection. I quickly stumbled upon a website called Star Archive, a website that billed itself as “the world’s largest autograph community”. It was a meticulously maintained database of addresses on which you could contact celebrities. Members submitted feedback on whether the addresses worked or not and uploaded scans of the autographs they received.

My mind was blown at how easy it all was. “You mean I can just write to Republic of Ireland international and the love of my life Matt Holland, and he’ll probably send me a signed photograph? Sign me up!”

So impatient was I to start collecting autographs, I started sending requests to any celebrity who had a working email address on the Star Archive and was known to send autographs that way. I sent a version of the same email to each celebrity: “Dear ____, My name is Amy O’Connor and I am ten years old. I’m a big fan of yours and I was wondering if you would be able to send me your autograph?” In hindsight, it reads as a rather thoughtless and impersonal form letter. But it worked!

Within weeks, I received my first ever autograph in the post from none other than Jim Geringer, the 30th governor of Wyoming. Did I know who he was? No. Did it matter? Absolutely not! Within weeks, I was receiving about a half dozen autographs per week from people like, I kid you not, Uri Geller and Noel Edmonds.

I soon switched my focus, preferring to focus on quality over quantity. Instead of firing off emails to obscure Republican governors – Arnold Schwarzenegger being the exception, of course – I started sending handwritten letters to celebrities I actually liked or admired. I wrote to singer Avril Lavigne when she performed in the Point Theatre. I sent a gushing note to the actress who played Sarah Louise Platt in Coronation Street because I was utterly obsessed with her teenage pregnancy storyline. And of course I wrote to my beloved Matt Holland who responded with a signed photo of himself in his Ipswich kit.

Over the next few years, I amassed a collection of a few hundred autographs. Brigitte Bardot, Hugh Grant, Terry Wogan, Judi Dench. The list goes on and on. My pocket money was spent on writing supplies and a lot of time was spent deciphering illegible handwriting. I loved every second of it.

As an autograph collector, I always relished a challenge. If a celebrity wasn’t known to send out autographs, I did my utmost to track down a working address for them.

At 15, I spent months trying to get in touch with the notoriously reclusive Harper Lee, author of To Kill A Mockingbird. After lots of research, I decided to send a letter to her via her sister’s law practice in Monroeville, Alabama.

A few weeks later, I received a short handwritten note from Harper Lee herself reading: “Dear Ms. O’Connor, I hope this gets to you because I have not a clue how much postage to put on it to Waterford, Ireland. Thank you for your letter. I did enjoy it. Sincerely, Harper Lee.” It remains one of my most treasured possessions.

Nowadays, autograph hunters have largely been replaced by selfie-seekers. I  gave up collecting many years ago, realising the jig was up when the comedian Aziz Ansari offered to write on my Facebook wall in lieu of sending an autograph. (I foolishly didn’t take him up on this offer.)

Perhaps I’m materialistic, but for me, selfies and Facebook posts are no substitute for some of the correspondences I have had with celebrities. I’m thinking of the time the author David Sedaris sent me a postcard from his home in Paris or the time my teenage crush Jason Schwartzman sent me his plectrum. (Swoon!)

What could have amounted to nothing more than a transactional correspondence was transformed into something more meaningful and considered, something I can look back on years later and still feel warmed by. Do selfies do that? I remain unconvinced.

These days, my autographs reside in scrapbooks and photo albums in my parents’ house. Rummaging through them is like reading an old teenage diary and being reminded of all your dorky phases and affectations. “That was when I was into Broadway musicals, that was when I got really into the television show Glee, that was when I was consumed by the Beijing Olympics . . .”

But every so often, I’ll come across something I had completely forgotten about. The last time I was at home, I was flicking through one of my photo albums when I came upon a small photograph of the late Bruce Forsyth decked out in a suit, beaming. On it, he had written, “Dear Amy, Best wishes, Bruce Forsyth.” And for a moment, it made me smile.

Coronavirus ‘cocooning’: the community wraps a soft blanket around its most vulnerable
6

Meatballs of fire: An easy, fun recipe for the ultimate Italian comfort food
9