Seán Moncrieff: Working from home isn’t sloping off. It’s anything but

The advantages are obvious: for families, for mental health, the environment and communities 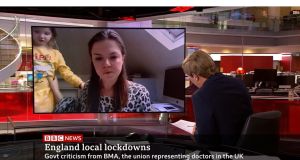 Interview interuption well handled by everyone: Dr Clare Wenham, being interrupted by her daughter Scarlett, during an interview live on BBC News. Photograph: BBC News/PA Wire

During the sunlit days of 2017, there was BBC Dad. Professor Robert E Kelly was doing an interview with the BBC via Skype (relatively unusual back then) when his two kids crashed into the room, followed by his wife who eventually managed to wrangle them back outside. Given its novelty, a clip went viral and afterwards Kelly and family gave another interview to the Beeb, during which he expressed a fear that the broadcaster might never talk to him again.

During lockdown, such Skype-interruptions have become almost commonplace. Earlier this month, there were two on the same day: on the BBC, Clare Wenham, a professor of global health policy, was interrupted by her daughter wanting to display her picture of a unicorn, while on Sky News, foreign affairs editor Deborah Haynes was interrupted by her son looking for biscuits.

Interestingly, the reactions of the two interviewers were slightly different. In the BBC version, the presenter chatted to the child – her name was Scarlett – and told her his name was Christian, while on Sky the presenter quickly shut it down to let Deborah “get back to family duties”.

Both of the presenters were male – let’s not beat them up for that – but the age difference might have been significant. The older chap on Sky, Mark Austin, seemed to feel that “work” and “family duties” should never mix, while the BBC’s Christian Fraser seemed to recognise that division as far more porous.

But even in the days when we left the house to go into the job, the work of family would always seep in. Texts and calls from the children and partners. Emails from the school. I’ve been presenting an afternoon radio show for more than 16 years and my kids still occasionally ring me when I’m on air. (My kids aren’t great on knowing what time it is. Or what day.)

The difference now is it’s more difficult to maintain the wall between home and profession: or more precisely, to maintain the pretence that such a wall exists. If you’re an employer, here’s the bad news: your employees aren’t focused on their jobs for every second of the day. Mostly, they want to do their best, but inevitably other life forces leak in. It’s unrealistic, even cruel to pretend otherwise.

No doubt, there are people who were, or still are, stuck at home and can’t wait to get out of there; and others for whom it’s simply not practical. You can’t do brain surgery in your garage. But there are some who have discovered something better than the commute and the nine to five routine. You can put on a wash, do a bit of work, collect the kids, do a bit of work.

It’s all work, of course. But the advantages of it are obvious: for families, for mental health, for the environment and communities. Having a Zoom meeting with an occasional kid in the background isn’t an impediment to this arrangement. It’s reality. It doesn’t mean you can’t do your job properly. And it’s nothing to apologise for.

None of this is a new idea. But what may have changed, hopefully, is the unspoken suspicion among employers that working from home is a form of sloping off. It’s anything but. It’s different, not worse. It’s a recognition that employees are people, not worker drones, and that a positive contribution can be made to the mythical work-life balance. Balance is good for everyone. This might be one of the few good things coronavirus gave us.

Ross O’Carroll-Kelly: ‘We could be in DeVille’s among people who get where we’re coming from. Literally the Vico Road’
3

In Oz, Marianne would have told Connell: ‘Get stuffed, you gutless wonder’
10