Time to put Christian in his place – after all, it’s what best friends are for 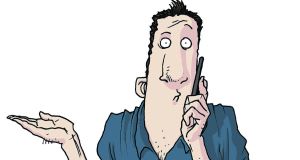 ‘There’s, like, ten or fifteen people just staring at us with their mouths wide open. It’s a look I remember well from my rugby days’

“Does that not seem random to you?” Sorcha goes.

“As in, my hairdresser still hasn’t phoned me back with an appointment? Even though they’ve been open since Monday and I left my details on the answering machine, like, two weeks ago?”

“I’m sure they’ve got a lot of people to see, Sorcha.”

“But Amie with an ie got hers done yesterday, even though I know for a fact that she joined the wait list after me?”

“And now I’m wondering is it because I didn’t give my hairdresser a like on Instagram when her and her friends did a Zoom call in their wedding dresses.”

“Because I was looking at her account last night and I noticed that Amie with an ie gave her a like. And Chloe gave her an ‘OMG’ with three exclamation morks and she’s getting her colour done tomorrow. So what do you think I should do?”

What if she’s deliberately not ringing me back because I snubbed her on Instagram?

“Well, I keep thinking that maybe my message got accidentally deleted and I’m wondering should I possibly ring again. But then does that seem a bit desperado?”

And she goes, “Ross, she understands my hair better than anyone ever has before. We’ve both invested years in the relationship. I’m not just going to throw it all away over a silly misunderstanding. Plus, she’s a L’Oreal Colour Trophy winner.”

“So why don’t you ring her again then?”

“Because what if it’s not a silly misunderstanding? What if she’s deliberately not ringing me back because I snubbed her on Instagram – or because I complained to her manager before the lockdown when she coughed into her hand instead of the crook of her elbow?”

Honor steps into the kitchen then. She’s like, “Are we going?”

“Where are you going?” Sorcha goes.

I’m like, “We’re going to drive the RV to Booterstown. ”

Bit of background here. My friend Christian has spent the entire lockdown converting an old Hiace into an actual camper van and he’s invited me and the goys over to his house this afternoon to show it off. Which is why I rented the biggest, most state-of-the-ort motorhome I could find – just to devalue his achievement.

“I can’t believe you’re going ahead with it,” Sorcha goes.

I’m there, “He thinks he’s hot shit just because he used the lockdown to teach himself plumbing, woodwork and metalwork. As his best friend, it’s my job to put him in his place.”

Yeah, this coming from the girl who’s trying to pluck up the courage to ring her hairdresser.

So we set off for Booterstown. I’m not lying when I say the RV is a big beast. It’s looks like the 2fm Roadcaster and I end up nearly scraping the sides of the thing trying to get it through the gate and out onto the Vico Road.

You know, the only time I really love you is when you’re being horrible to people

It ends up being pretty hord to, like, navigate the narrow roads of Killiney in the thing. I’m there, “I’m not sure I’m supposed to be even driving this with just my regular licence.”

And Honor goes, “I know! I think it’s technically a bus! Oh my God, I can’t wait to see Christian’s face when we rock up in it!”

I’m like, “That’ll teach him to challenge the Rossmeister to a mickey-swinging contest.”

“You know, the only time I really love you is when you’re being horrible to people.”

“That’s a lovely thing to say, Honor. I suppose I could say the same thing to you. We’re peas in a pod, me and you. Peas in a literally pod.”

“Will I tell you something hilarious?” she goes. “Mom’s hairdresser rang the other day and I told her that she’d decided to stort going somewhere else to get her hair done because she always made a mess of her colour.”

“Do you not think it’s funny?”

We eventually arrive in Booterstown. We pull up on the road outside Christian’s gaff. I kill the engine and it makes this, like, decompression sound, like a 46A – I’d imagine.

I spot Christian and Lauren in the gorden along with a bunch of others, including JP, Oisinn and Fionn, and they’ve obviously been giving them the tour of their little camper van.

Ross, did you drive that thing over here today just to try to lessen my achievement?

Me and Honor hop out of the RV, all smiles. There’s, like, ten or fifteen people just staring at us with their mouths wide open. It’s a look I remember well from my rugby days.

It’s Lauren who ends up cracking first. She’s there, “What the fock is that?”

I’m like, “What, this bad boy? Yeah, no, we were thinking in terms of a staycation for our holidays this year. We’re going to drive this old thing around Ireland. Oh my God, look at your little bus there!”

Christian goes, “Ross, did you drive that thing over here today just to try to lessen my achievement?”

I’m like, “Er, no. Oh my God, you’re paranoid, Christian. Totally paranoid. So do you goys want to have a look inside? It’s got, like, two bedrooms, both with super-king beds. Real leather upholstery. Electric fireplace. A 110-inch TV. Two-door American-style fridge freezer. Double oven and hob, as well as a Teppanyaki grill. Do you want the tour?”

But little Ross Junior ends up letting her down in a major way. He goes, “Mommy, I wanth to thee ith!” and he comes running out of the gorden towards the bus.

Of course the rest of them end up being shamed into having a look themselves then.

I’m like, “This way, Christian. Yeah, no, I was going to do up a little van like you did. But then I just thought, fock the sense of achievement, I’d rather my family enjoyed a bit of luxury – isn’t that right, Honor?”

I show everyone inside. I open the door of the master bedroom and I end up being greeted by a sight that sends my blood instantly cold. My old man is standing there. And standing next to him is Sorcha’s old dear. I take one look at her embarrassed face and the tossed sheets on the bed and the penny instantly drops.

“Ross,” the old man tries to go, “I can explain everything!”