Seán Moncrieff: My computer broke. It’s like part of my house burned down

It’s almost impossible to function without an electronic device. They have left us powerless 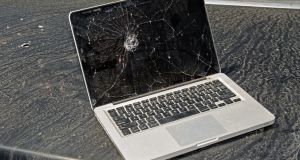 In my house there’s a room that we pretentiously call The Office. In truth it’s a storage hub for coats, crates, jackets, shoes, CDs, unused shelving, paintbrushes and sundry other objects that we don’t know where to put. There are two desks, one that is occasionally used by daughter No 2 for study/staring at her phone, and mine, which is squeezed in by the back wall. That’s where I keep my typewriter.

It’s a Royal KMM. It dates from the late 1930s, was designed by two Irish-Americans and was the iPhone of its time. Tennessee Williams had one. Rod Sterling had one. The pope had a custom-made white one. During the war years, the US army brought thousands of them to Europe, which is probably where mine originated. My KMM was a 21st birthday present from my parents. I’d asked for one, or something similar, as I’d learned to type on typewriters and wanted a big, sturdy machine. I like to whack the keyboard when I type: it’s part-composition, part-attack, while I imagine that I have a cigarette between my teeth and a half-drunk whiskey bottle on my desk. I’ve just returned from running bulls or shooting someone. When it comes to typing, I’m an unwoke dinosaur.

Millions of words have been written upon this machine, by me and the others who owned it before me. It’s at least 70 years old and it still works. No built-in obsolescence here. Sitting across from my iMac, it looks like a museum piece, yet it will outlast the computer. It already has.

I love it and will never throw it away, but I have no use for it. I couldn’t write this column on a typewriter. Same for my radio work, or anything else I write. I could write the occasional letter I suppose, but that would be doing it for the sake of it; fetishising a machine that wants only to be practical.

The computer replaced the typewriter, but so much else too. The reason why my “office” is squeezed into the corner of what is effectively a large cupboard is because I don’t need that much space. I don’t need filing cabinets because everything is on the computer.

So when it went on the blink two days ago, all sorts of important documents, personal and professional, became inaccessible. (Yes, most of it was backed up, but still.) A computer, a laptop, even a phone going wonky is the modern equivalent of part of your house burning down. And to salvage those contents, you don’t go to a doctor or a lawyer or someone for whom confidentiality is implicit in what they do. You go to a shop where you have to tell some guy in a crumpled T-shirt that your password is SexDonkey23*, leaving him and others you haven’t even seen in a position to rake through many of the most intimate facts of your life.

When I was a teenager I had a summer job. (It was in a headstone factory, but that’s another story). Everyone got paid, legally, in cash. But that practise ended soon after. In a drive towards convenience and security, wages went straight into bank accounts. This may have been convenient, but it also handed enormous power to private businesses: banks. Suddenly our society can’t function without these private businesses. None of us can operate without bank accounts. Other than Bertie Ahern.

Similarly, it’s almost impossible to function these days without an electronic device: even though we know that tech companies can spy on us, can sell our data, can treat us as commodities to be sold on. And in return we get to communicate: we can talk to anyone in the world to let them know just how powerless we’ve become.