Seán Moncrieff: Is originality dead? Perhaps it never existed in the first place

It sometimes feels like we’ve run out of stories, and the only option is to return to what was said before 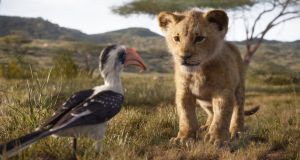 The Lion King: Re-makes like the Lion King invariably prompt the criticism that Hollywood has run out of new ideas and resorted to lazy re-treads of old classics to rake in some cash.

Myself, Herself and Daughter Number Four went to see the Lion King. We all thought it was dreadful. It apes (pun!) the original film but contains additional scenes that explain what is patently obvious, along with a few glib eco-friendly sentiments. And the hi-tech animation that makes it look like there are actual talking lions somehow renders the story lifeless.

When I expressed these opinions at home, Daughter Number Four, who is three, didn’t contradict me, so I’m assuming that she completely agrees. But Daughter Number Three, who saw it on a separate trip, said she couldn’t disagree more. She greatly enjoyed it. Admittedly, my reaction was more than a little informed by comparing it to the previous film. Unlike Daughter Number Three, I’d seen the original countless times, mostly because Son Number One had been obsessed with it. It was the Frozen of its day, and had such a profound effect upon him that his first pet was called Simba.

Re-makes like the Lion King invariably prompt the criticism that Hollywood has run out of new ideas and resorted to lazy re-treads of old classics to rake in some cash. But that in itself is a lazy criticism. The latest iteration of the much-remade A Star is Born proved that something memorable can be hewn out of an old story. And so much of our arts and culture consists of repurposing existing material. If I turn on music radio, I recognise a lot of the songs; or more precisely, bits of songs that I grew up listening to: which you can regard as post-modern reimagining or proof that musicians these days can’t come up with their own hooks.

In the arts, this has always happened to some degree: naked Shakespeare, or Medea set in space. Yet nowadays it does sometimes feel like we’ve run out of stories to tell ourselves, and so the only option is to return to what was said before, stick an iPhone in the hands of the characters, and hope something new emerges.

I’m going to avoid saying originality is dead because it would he highly unoriginal to do so. We’ve been saying it for quite some time. It’s just that this worry has been amplified by the internet and an anxiety-ridden generation who fear that their only contribution to cultural history may be the meme.

Part of the problem is the idea of originality itself: that a painting or a novel or even an idea emerged into the world unrelated to anything that had gone before. A piece of music can’t sound similar to any other piece of music. But there are only so many notes and combinations of notes, and at this point in history, they’ve probably all been used.

Anyway, new ideas have tended to be a reaction against a prevailing ethos or an attempt to improve what’s already there. In the pre-internet era, this used to be called an influence; though there’s never been a clear delineation between being influenced and copying.

The key difference then was that it was far more difficult to source and present comparisons between an “original” piece of work and what influenced it. Now it happens all the time. Back then, some even bragged about it. “Talent borrows. Genius steals,” said Oscar Wilde. Or TS Eliot. Or Igor Stravinsky. Or Morrissey. They, and many more, have been credited with this quote. They probably all stole it. So much for genius.

I did get around to asking Son Number One what he thought of the new Lion King, fully expecting his disappointment to mirror my own. But he loved it. After all, he’s not me: Simba and Scar and Nala didn’t populate my childhood imagination the way it did his. Perhaps the originality doesn’t reside in the art, but in each mind it touches.