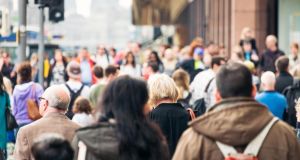 ‘The interplay between nature, nurture and lived experience is still something of a mystery.’ Photograph: iStock

It’s been a staple of US politics for quite a while, but increasingly we’re seeing it here. Politician is discovered to have made sexist/racist/offensive remarks in the past. These comments are plastered all over social media. Politician claims the comments were taken out of context, then claims this is part of a plot orchestrated by people with an agenda. As you know, there’s nothing worse than an agenda.

Eventually they issue a gushing apology, one that often arrives in tandem with a meeting with the offended group. The offended group accepts the apology, and in doing so, provides redemption for the sinning politician.

A lot of the time, no one believes a word of this. The general assumption is that the politician has rejected their own opinions to hang on to their job. The volte face is purely careerist. Because we’re cynical about politicians. And because people don’t change.

Curiously, similar logic applies when a politician starts expressing offensive ideas in the present. If, for instance, they suddenly spout anti-Traveller or anti-immigrant views, there’s a widespread assumption that they are doing it to attract votes, but deep down they don’t believe any of this stuff. Deep down they might still be a wild lefty. Because people don’t change.

Really? If you consider the vast and varied contents of a human life, it seems extraordinary that a person would grow up, have a few formative experiences along the way and at a certain point come to a dead stop. They are the person they are, and no matter what happens, will remain so.

Yet this is a common view, one often embraced by scientists. The Harvard psychologist William James declared in his work The Principles of Psychology that “by the age of 30, the character has set like plaster, and will never soften again”. Then again, he did write this in 1890, when the average life expectancy was about 50. Nowadays some 30-year-olds are yet to get into a long-term relationship or parent a child. Some still live with their parents.

The truth is that, more than a century after James wrote his book, psychologists still haven’t figured it out. They’ve identified different sorts of personality and facets of personality. They’ve proven that, through therapy, people can change certain behaviours. Common sense tells us that experience can bring people to change their opinions. But it’s still not clear if these experiences fundamentally change who a person is; or if it happens that often. The interplay between nature, nurture and lived experience is still something of a mystery.

If you’re the kind of person who claims you can’t change because of your nature, then you’re being dishonest and lazy

But we are all amateur psychologists, and we tend to view the personalities of other people as fixed, particularly people we don’t trust. Double that if it’s a politician. “A leopard never changes its spots”, among other cliches, suggests that each of us has a singular nature that can’t be amended. We can act differently, seem to be different, but we’re only pretending. Eventually we will reveal ourselves through some gotcha Freudian slip.

The corollary of this two-dimensional, deterministic view of human nature is the person who thinks it of themselves – usually in the context of ongoing permission to act like an ass. I can’t help it. That’s just the way I am.

This should be the hugging-learning bit where I exhort you all to appreciate each other’s wonderful complexity and recognise that each of us can and does change. If you’re 50, can you honestly say you’re the same person you were at 30?

But instead I’m going to opt for a wild generalisation. If you’re the kind of person who claims you can’t change because of your nature, then you’re being dishonest and lazy. If you fail to consider even the possibility that others can change, you’re being dishonest and lazy. But you’re the sort of person who will never admit to it. You’ll never change.