Royal baby: Everything you need to know (and a few things you don’t)

Meghan Markle and Prince Harry's baby has arrived. Here are answers to the burning questions 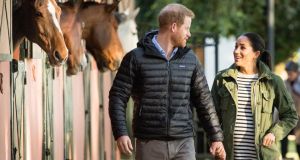 Prince Harry and Meghan Markle sent the world into a tailspin when they announced, last October, that they were expecting their first child. Between then and today’s announcement of the baby’s birth, we have been treated to endless speculation, much of it baseless, about baby names, water births, mother-and-baby yoga, family rifts and everything in between.

Boy or girl?
The Duchess of Sussex gave birth to baby son Archie at 5.26am on Monday. Mother and child are both doing well, Buckingham Palace has announced. The Duke of Sussex, aka Harry, was present for the birth.

What weight?
The eighth great-grandchild of the 93-year-old Queen weighed 7lbs 3oz at birth.

Where will the family live?
Prince Harry and Meghan Markle are settling into life at Frogmore Cottage, a “cottage” – read: 10-bedroom house – so named for the “preponderance of frogs” that live in the area.

Where did she give birth?
Unclear. The couple have chosen to keep the details of the birth secret. There was speculation that she would opt for a home birth. Should she go for a hospital birth, there were reports that she would choose Frimley Park Hospital, near the couple’s new frog-infested home, or the uberluxe Kensington Wing at Chelsea and Westminster Hospital. The latter has been dubbed “Britain’s poshest maternity ward” and been used by both Amal Clooney and Cheryl Cole.

Did I hear that Meghan has – gasp! – opted to shun Queen Elizabeth’s gynaecologists in favour of her own doctors?
Yes. Unconfirmed reports suggest she appointed her own delivery team, headed by a woman doctor. This has been viewed as a “snub” to the royal-household gynaecologists – yes, that is a position – Alan Farthing and Guy Thorpe-Beeston, who delivered Kate Middleton’s three children.

We are pleased to announce that Their Royal Highnesses The Duke and Duchess of Sussex welcomed their firstborn child in the early morning on May 6th, 2019. Their Royal Highnesses’ son weighs 7lbs. 3oz. The Duchess and baby are both healthy and well, and the couple thank members of the public for their shared excitement and support during this very special time in their lives. More details will be shared in the forthcoming days.

Will she do that thing where she parades the royal baby in front of the world’s media mere hours after giving birth?
Absolutely not. Buckingham Palace has confirmed that the couple “have taken a personal decision to keep the plans around the arrival of their baby private”. They will share the news of the birth “once they have had an opportunity to celebrate privately as a new family”. That likely means no photo opportunities or advance details of the birth. It also likely means a lot of waffle from “royal experts” over the coming weeks.

Will the royal baby have an official title?
Most likely, although it’s still unclear what exactly that will be. He may use his father’s secondary title of earl of Dumbarton.

The earl of Dumbarton?
It might not have much of a ring to it, but Queen Elizabeth bestowed the title on Prince Harry when he married Meghan last year. It’s a Scottish title, named after a town half an hour outside Glasgow, and out of use for 260 years.

Where will the royal baby fall in the line of succession?
The royal baby will be seventh in line to the UK throne, nestled between Prince Harry and Prince Andrew, the queen’s second son.

Will the royal baby be christened?
As the queen is the supreme governor of the Church of England, and we haven’t heard anything to the contrary, almost certainly.

Will the baby have famous godparents?
Quite possibly. Harry and Meghan have quite the collection of celebrity friends. As well as Serena Williams and the Clooneys, think Oprah Winfrey and Priyanka Chopra. Paddy Power makes the favourites Meghan Markle’s best friend, Jessica Mulroney, and her husband, Ben. Jessica is a Canadian stylist; Ben is the son of the former Canadian prime minister Brian Mulroney. Canadian royalty, if you will. Other names floated include Prince Harry’s close friend Charlie van Straubenzee, Meghan’s former Suits castmate Abigail Spencer and Prince Harry’s mentor Mark Dyer.

Will the royal baby be an American citizen?
The US state department says a child born abroad in wedlock to an American citizen – Meghan has yet to take British citizenship – and an alien automatically acquires United States citizenship at birth, provided the American-citizen parent has lived in the US for a certain period, in Meghan’s case 10 years. That means the baby will be liable for US taxes until the age of 18, potentially causing a headache for the notoriously secretive royal family. Stinger.

Will the royal baby be vegan?
British tabloids have fixated on this question for weeks. “Meghan Markle and Prince Harry ‘want to raise Baby Sussex as a vegan’ but it ‘will not be tolerated’ by the Queen” read one hysterical headline. Sounds like fodder for an especially dull episode of The Crown. Here is what we know: Meghan and Harry reportedly follow a plant-based diet during the week. The couple have not publicly said what they will or will not be feeding their offspring, meaning he or she could subsist on Farley’s Rusks, for all we know.

Say one wanted to commemorate the birth of this child. Is there a way one could do that?
Yes. For just £125, or about €150, you can buy one of 100 Limited Edition Royal Baby Bears from the official royal gift shop. Each bear is made using alpaca fur and has a “truly individual personality”.