Laura O’Mahony on faith, family and feminism, and why her style of comedy has international appeal 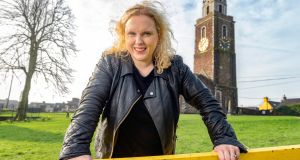 Laura O’Mahony: “I want to be in Dancing with the Stars, can you put that in? I can’t dance for love nor money but I’d give anything to have a shot at it.” Photograph: Michael Mac Sweeney/Provision

There she was, mid-air and carefree on a summer’s evening in east Cork with the Atlantic waters beneath her – before the sun’s glare connected with a moving object.

“It was my father’s car,” explains Laura O’Mahony.

“My parents said the one thing I was not to do at Knockadoon Irish College was to jump off the pier but wouldn’t you know it. The one second of my teenage years that I decide to be rebellious and my father happens to spot me,” she adds.

The story serves as an outlier to an otherwise obedient youth.

“I was a good girl, student of the year twice in secondary school. I didn’t rebel because I never felt I had anything to rebel against. I still have nothing to rebel against. I have no interest in being a dose,” explains the comedian, whose work with the CCCahoots trio, in the comic sketch show The School on RTÉ and in the popular Bridget and Eamon sitcom has seen her stock rise steadily in recent years.

Since the age of eight, O’Mahony has had the bug for entertaining. Her second-class teacher, Mrs Horgan, used acting to teach long division. Students would physically have to carry the one from one side of the room to the other.

So performing comes naturally to Laura O’Mahony . . . so much so that scripts and formulas irritate.

The majority of people you meet in comedy can be quite serious. They take a mathematical approach and every line is calculated

“You know something,” she tells me in her kitchen in Cork, “the majority of people you meet in comedy can be quite serious. They take a mathematical approach and every line is calculated. I don’t think I’ve ever written down my stand-up because I’m not observing anything other than my own life. All of my stories are true, perhaps with a little embellishment, but they stem from truth.

“I’m not trying to change the world. Some of the bleakest people you’ll ever meet are comedians – I have no time for bleak. The way I see it is if you’re not laughing at every sentence I say in my stand-up, then I don’t have it quite right.”

O’Mahony is really getting it right at the moment. In February, CCCahoots, which includes the hilarious Tadhg Hickey and dynamic Dominic McHale, sold out Cork Opera House and Whelan’s in Dublin with their unique shows – combining sketches, song and an interactive musical piece with the audience.

“It’s been brilliant really. Those performances give us a massive lift,” explains O’Mahony, who first set eyes on Tadhg Hickey, the inspiration behind the group, when he was semi-naked.

“I was in transition year at Coláiste Na Phiarsagh in Glanmire. We went to UCC to watch a performance of Jesus Christ Superstar and Tadhg was playing Jesus. I spotted him up there with his long hair on the cross and thought hmmm. It was a real Boyzone crush moment,” says O’Mahony.

A few years later she, Hickey and McHale would come together to film scenes for The Fear – RTÉ’s hidden camera show – and the rest is history.

“We spent a day together in Cork and sure the craic was unreal. We knew that we could work together and it’s such a joy. The lads are class,” adds O’Mahony.

It’s the group’s take on Irish pop culture which has endeared them to fans, earning them near cult status with many.

One recurring sketch, depicting a new fully grown-up Ann and Barry (from the English books so many 30-pluses will recall from their primary school days), captures perfectly their ability to take something so uniquely Irish and develop it into a belly-tickling scene. Or their adaption of Derry Girls to a trio they call Kerry Girls – with first names Jackie, Danny and Michelle.

In CCCahoots we are looking at Ireland through a lens with so much love, we’re not trying to be cynical or political

“I love Ireland and its lunacy. In CCCahoots we are looking at Ireland through a lens with so much love, we’re not trying to be cynical or political,” explains O’Mahony. She continues: “I used to work in Liam Ruiséal’s bookshop in Cork and one day a woman came in to have her wrist watch photocopied. I had absolutely no clue why this was happening but I was so on board with it. I loved it. A bit like the d’Unbelievables – not mocking people, just picking up on things and the way we are as a people.”

O’Mahony, Hickey and McHale all contribute to the writing process with CCCahotts and while they’re very proud of their Cork roots, they’re determined to expand their appeal, both nationally and internationally, as Laura O’Mahony explains: “We suffer a bit from being referred to as the ‘Cork version’ of this or that. It can be a bit limiting. We believe our style and humour can travel. We’ve also had chats with BBC and Channel 4 and while there’s nothing definite there yet, we don’t see any reason why a lot of our material wouldn’t work really well there too.”

Their way has been championed by the likes of Ian Dempsey on Today FM and their three-part comedy series on RTÉ, The School, won rave reviews.

“I was pregnant with my second child Alfie during the making of The School so in a way that was his televised debut. My eldest child Polly has also been on screen – oh and my husband Shane [an electronic engineer] as well. It’s very much a family affair,” explains the mother of two.

Contributing regularly to the Last Word on Today FM and supporting Deirdre O’Kane and Des Bishop in recent months, O’Mahony’s making a name for herself and, as she says herself, not simply because she’s a female comedian.

I’ve no interest at all in being judged on anything other than merit. The very thought of it. I don’t see male or female if I’m honest

“I’ve no interest at all in being judged on anything other than merit. The very thought of it. I don’t see male or female if I’m honest. I don’t want anyone to introduce me as the girl where people are thinking ‘ah sure God help her’.”

Refreshingly confident in her own skin, O’Mahony has no problem speaking of her strong spiritual connection. She tells me: “I wouldn’t be waving the flag for the Catholic Church or anything but I believe in God and my belief is very important to me. At times in my life the notion of there being something else greatly helped me. I don’t want to examine it in too much detail. I pray at night, think of God every day and if things go wrong I turn to him. It’s just what I do and I don’t overthink it.”

For now, O’Mahony’s focus is on the future and riding the wave the CCCahoots trio have generated. Their new fortnightly podcasts on Cork’s RedFM have rebels in raptors. Simultaneously, O’Mahony continues to climb the ladder as a stand-up and comedic actor in her own right.

She adds: “Oh and I want to be in Dancing with the Stars, can you put that in? I can’t dance for love nor money but I’d give anything to have a shot at it.”