Hilary Fannin: It had been a dream, but it didn’t feel like a dream. It felt very real 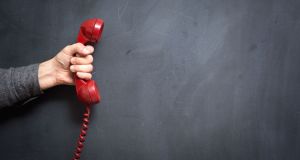 Google 'talking to the dead on the telephone' and you won’t be left hanging on. Photograph: iStock

I was tired. I hadn’t been sleeping well. Days were busy, people in and out of the house, pasta cooking, cat mewling, past decisions and new directions dissected on the chopping board.

I was tired. I sat down at the kitchen table, opened my laptop and saw that the battery was low. A square of sunshine fell on the rug next to the table. Outside, the weather, like a lousy dancer, was all out of rhythm, throwing hailstones and withered daffodils around, then changing its mind and piercing sunbeams through the lumbering clouds.

I plugged my laptop into the charger and lay down on the sunny rug, just for a moment. I had a deadline, two deadlines. I closed my eyes.

There was a slight pause before the caller spoke, and then her voice: airy, pipey, tinged with deceptive playfulness

I really shouldn’t have closed my eyes.

The telephone rang in the other room. I got up and went to answer it. There was a slight pause before the caller spoke, and then her voice: airy, pipey, tinged with deceptive playfulness. I hadn’t heard that voice for a long time. She was warm, cascading through the formalities, through my surprised hello and my banal, astonished “where have you been?”.

“It’s just,” my mother began, dismissing my inquiry, “that I can see a small passageway beside me, and if I’m able to see that passageway, well then, I mustn’t be dead.”

I opened my eyes. I was still on the kitchen rug. My heart was pounding.

Google “talking to the dead on the telephone” and you won’t be left hanging on. There are endless paranormal, parapsychological accounts of people chinwagging between worlds, shooting the spectral breeze, enjoying a ghoulish gab.

The story that pops up most often on the supernatural websites I consulted comes from the American thriller writer Dean Koontz. Apparently Koontz told his biographer that he once received a strange, possibly otherworldly, call on his unlisted office phone.

Picking it up, he heard a woman’s voice, from “far away”, repeatedly telling him to “please be careful”. Koontz said that the distant voice on the line had sounded exactly like his mother, who had been dead for 20 years. He then described a life-threatening incident that befell him a few days later, involving his psychotic father, a sharpened flick-knife and an armed and nervous policeman.

Sometimes our loved ones just want to say hi, sometimes they want to remind us that we’ve left the gas on

Don’t ask me if the story is true or not. The guy is a fiction writer, so who knows where his imagination begins and his realities end.

Anyway, I lay there on the rug, looking at the clouds through the grubby Velux windows, awake now but shook. The empty house felt frightening, my heartbeat an intrusion.

It had been a dream, but it didn’t feel like a dream. It felt real. I’d gone to answer the landline worrying about the half-written article I was supposed to have completed. I’d dived on the phone before the stupid answering machine, which always kicks in too early, came on. I’d felt my familiar irritation with the daft place we keep the phone, on a low windowsill behind the couch, which means you have to pole-vault over the furniture to answer it.

It had all felt mundane, until I heard her voice.

Later I cheered myself up no end by reading wise words from a psychic medium, whose photograph on his website reveals a man with excellent dental insurance. (Believe me, those kind of ultra-violet tombstone teeth don’t come cheap.) The silver-fox online psychic with the enviable dentistry (and equally fetching coral-coloured pullover) enumerates the many ways that the dead can talk to us. Deceased pipe-smokers have been known to waft pipe smoke around, but mainly the dead make house calls, and usually when we’re asleep.

The reasons for these communications vary. Sometimes our loved ones just want to say hi, sometimes they want to remind us that we’ve left the gas on and sometimes they need to borrow a tenner. (All right, I’m making that last one up.)

“Love Never Dies,” writes the debonair psychic. “Your deceased loved ones want to connect with you!” – which is a concept I find pretty alarming. I mean, the occasional phone call is one thing, but, let’s face it, it could get kind of wearing.

It was the deceased lovers I read about that really scared me though. Numerous inamoratos seem to have an uncanny – nay, downright disturbing – predilection for James Blunt’s music, with more than one account from the bereaved claiming that You’re Beautiful came drifting through the car radio on significant anniversaries. A situation that would most certainly prompt me to purchase a bicycle.

Easy soda bread for the ultimate cheese on toast

Irish woman in San Francisco: Life is quiet but everyone is exercising
Real news has value SUBSCRIBE