Notre Dame: Is it indulgent to be sad about the loss of a French cathedral? 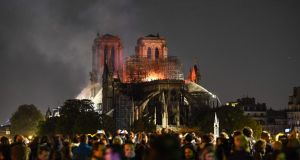 Bystanders look on as flames and smoke are seen at Notre Dame Cathedral in Paris. Photograph: Eric Feferberg/ AFP/Getty Images

On seeing social media images of Notre Dame Cathedral violently aflame, many of us were struck by a chagrin so intense that we were surprised by it. The loss – and it is indeed a loss – is so deeply felt for several reasons.

We have an inherent ability to identify meaningful objects and a fundamental recognition of beauty when we encounter them. Images of what history had falsely taught us was an immovable, almost atemporal structure being proved so frighteningly fragile are unsettling.

An uncharitable instinct might lead one to wonder how a historic loss so quickly turned into a photo opportunity for people to signal their relevance to the incident online, and to slice their share out of the attention by posting images of themselves visiting the intact cathedral.

Yet, posting a photo of oneself on a trip to this architectural marvel even while it burns might also be seen as a psychologically tender gesture; a small offering to others and the universe, an articulation of personal and emotional attachment to something that puts our small and finite lives into perspective, and represents the indomitable achievement of collective vision, mutual effort and proximity to something divine.

Yes, it is just a building, and yet something not entirely emotional, but rational too, tugs inside when people say that about Notre Dame Cathedral. It is a symbol of the Western history of ideas – a philosophical, theological and aesthetic lineage that underpins our current values and outlook, and which we might look carefully back at to contextualise who we are, and how we got to where we are today.

The values that our society sits upon were more than figuratively carved into those stones, and you need not be Catholic, or even Christian, to appreciate that. I am neither. You simply have to feel your own vulnerability in the universe; that everything is moulded by what came before, even that which rebels against it. By finding its definition in the opposite of what preceded it, an idea still relies upon that predecessor for its foundation, and owes it significant acknowledgement. Notre Dame Cathedral is a triumph of the human mind and the history of western artistic and intellectual thought.

A sense of order inside chaos

During the period when Gothic architecture was emerging from the Romanesque tradition, Catholic theologians and thinkers were exploring the relationship between geometry and God. The history of philosophy considers mathematics as true always, and under all conditions. St Augustine considered architecture and music the highest order arts, since their mathematical dimensions were an articulation of an objective reality unmitigated by human cognition or experience.

My favourite philosopher, Spinoza, who lived much later than Augustine, attempted to do something similar, but without the need for a Christian God. Spinoza tried to capture the inherent geometry of reality in his magnum opus, the Ethics, a book of geometric propositions in which each axiom, premise and conclusion is linked mathematically to the others. It was an attempt to construct a system of everything and explore every possible question that might arise in relation to that system. Like a cathedral, it is a structure of inherent consistency and holism, and that makes it exceptional.

Some scholars fancy Spinoza an atheist, but he is nothing so straightforward as that. For Spinoza, God is the world and everything in it as articulated through the ceaseless, disinterested system of nature. We are not, Spinoza says, a dominion within a dominion. The process and function of nature is indeed ordered – it just isn’t ordered around us. The scholastic tradition of philosophers like Augustine has sometimes been credited with generating the thinking which gave rise to cathedrals – those great mathematical structures which embody the perfection of divinity in an imperfect world.

In the geometry of the Ethics, Spinoza sought a form of truth which draws order out of an apparently chaotic universe. This is what cathedrals – and Notre Dame – represent. There is little more comforting than a sense of order inside chaos, and nothing quite as frightening as watching the chaos pull it back in and swallow it up.

Is it indulgent to be sad about the loss – or partial loss – of a French cathedral? Maybe. But in an increasingly chaotic world, we are right to value the beauty and meaning that past people laboured to create.