Michelle Obama: We had to use IVF to conceive our daughters 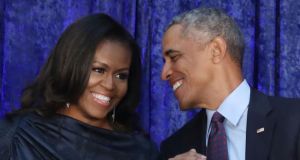 The accomplished, impressive couple that are Michelle and Barack Obama just became more perfect, in their humanity and very common personal challenges. Michelle Obama today talked about having a miscarriage 20 years ago, and then using in-vitro fertilisation to have their daughters.

In the run-up to Tuesday’s publication of her memoir, Becoming, Michelle LaVaughn Robinson Obama – lawyer, university administrator and writer – told ABC, on Good Morning America, that she felt “lost and alone” after her miscarriage, and felt as if she had “failed, because I didn’t know how common miscarriages were, because we don’t talk about them”.

The full ABC News interview will be broadcast in the United States on Sunday evening, in Becoming Michelle: A First Lady’s Journey with Robin Roberts.

She tells Roberts: “I think it’s the worst thing that we do to each other as women, not share the truth about our bodies and how they work...
That’s one of the reasons why I think it’s important to talk to young mothers about the fact that miscarriages happen.” Obama talks about realising at 34 or 35 that “the biological clock is real” and “egg production is limited”.

Becoming is her half of a two-book deal, reportedly worth more than $60 million (€53 million), the Obamas signed last year with Penguin Random House, a record sum for US presidential memoirs.

In it she also writes of her shock the night she learned Donald Trump was to succeed her husband as president – she tried to “block it all out”.

She accuses Trump of using body language to stalk Hillary Clinton, his Democratic Party opponent, during the 2016 presidential-election debates, by following her around the stage, standing nearby and “trying to diminish her presence”.

Obama also criticises Trump for his remarks on the Access Hollywood tape, from 2005, when he told Billy Bush, an anchor of the American entertainment show, that, “when you’re a star”, women you meet let you start kissing them. “You can do anything. Grab them by the pussy.” Obama interprets his message as: “I can hurt you and get away with it.” The words appear in the book in darkened print.

What if someone with an unstable mind loaded a gun and drove to Washington? Donald Trump, with his reckless innuendos, was putting my family’s safety at risk

The former first lady also writes that she doesn’t forgive Trump for spreading “birther” rumours that Barack was born in Kenya rather than Hawaii, which would have made him ineligible to be president of the United States.

Reports quote the book as saying: “The whole thing was crazy and mean-spirited, of course, its underlying bigotry and xenophobia hardly concealed. But it was also dangerous, deliberately meant to stir up the wingnuts and kooks.”

The reports of the book continue: “What if someone with an unstable mind loaded a gun and drove to Washington? What if that person went looking for our girls? Donald Trump, with his loud and reckless innuendos, was putting my family’s safety at risk. And for this I’d never forgive him.”

She also writes about personal moments and insights that shaped her life, including her childhood on the South Side of Chicago, her college years at Princeton, and her love affair with Barack; they met when she was his adviser at a law firm. Despite their immediate attraction, she insisted they just be friends – but all that changed one night when he kissed her.

Obama reveals that they had counselling when their relationship was under stress. “Marriage counselling for us was one of those ways where we learned how to talk out our differences,” she tells ABC. “I know too many young couples who struggle and think that somehow there’s something wrong with them. And I want them to know that Michelle and Barack Obama, who have a phenomenal marriage and who love each other, we work on our marriage. And we get help with our marriage when we need it.”

I was female, black and strong, which to certain people translated only to ‘angry.’ It was a cliche forever used to sweep minority women to the perimeter of every room

When Barack decided to run for president, she says, she knew the campaign would be hard, but she was unprepared for attacks calling her unpatriotic and an “angry black woman”.

“I was female, black and strong, which to certain people... translated only to ‘angry.’ It was another damaging cliche, one that’s been forever used to sweep minority women to the perimeter of every room... I was now starting to actually feel a bit angry, which then made me feel worse, as if I were fulfilling some prophecy laid out for me by the haters.”

Obama is unlikely to run for public office herself. “If I’d learned anything from the ugliness of the campaign, from the myriad of ways people had sought to write me off as angry or unbecoming, it was that public judgment sweeps in to fill any void... I knew that I would never allow myself to get that banged up again.

“I’ve never been a fan of politics, and my experience over the last 10 years has done little to change that. I continue to be put off by the nastiness.”