Ross O’Carroll-Kelly: Honor has suddenly started to think about environmental issues ... but why? 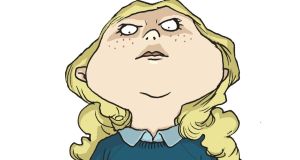 “I didn’t think Honor was into that whole save the world thing. I’m remembering all her school friends going into town for the Strike for Climate Change day. She went shopping.”

Sorcha is totally – I think it’s a word? – adamint about me not going to the World Cup. She found out that Honor has been secretly driving our cors and that I knew all about it. I’ve never seen my wife more angry with me and I’m saying that as someone who – hey, I don’t need to give you the full rap sheet on the things I’ve done.

Anyway, it’s, like, Thursday afternoon and I’m having one of my world famous lie-ins when Sorcha all of a sudden texts me, going, “Ross, can you come downstairs to the kitchen? There’s something down here that you omg NEED to see!”

So downstairs I tip. I’m there, “Hey, Sorcha, I didn’t hear you come in from work,” and she makes no comment – good or bad – about how long I’ve managed to stay in bed for.

She just goes, “Look at this!” and she holds up this, like, homemade placord that says, “Climate Action NOW!” next to a picture of a planet – quite possibly Earth.

I’m like, “Honor? I didn’t think she was into that whole save the world thing. I’m remembering all her school friends going into town for the Strike for Climate Change day. She went shopping.”

In my Audi, I could add.

Sorcha goes, “Well, it’s never too late for any of us to realise our responsibilities in respect of the planet. You might ask her about it, will you, Ross?”

“Because she’s not talking to me at the moment.”

At that exact moment, right on cue, Honor walks into the kitchen. She does the usual. She walks over to the fridge, opens the door, rolls her eyes at the lack of food options available to her, slams the door, sighs and says she – oh my God – hates living in this house.

Honor goes, “Found what?” and then she notices the placord in her old dear’s hand. “Oh my God, what are you doing with that?”

Sorcha goes, “I just want you to know I’m so, so proud of you, Honor!”

Honor’s like, “Whatever,” and she looks away, embarrassed. I remember her telling me the day after Ireland beat the All Blacks that being seen to care about anything is a sign of weakness.

Sorcha goes, “It’s just I didn’t think you were interested in climate justice. I’m remembering your reaction when I suggested giving your birthday money to a charity that plants Sitka spruces to sequester corbon emissions.”

God, I remember that day. Honor packed her bags. She packed Sorcha’s bags, I mean.

Honor just shrugs her shoulders and goes, “You said it yourself. It’s never too late for us to realise our responsibilities in respect of the planet.”

“I did say that!” Sorcha goes. “Oh my God, Honor, you remembered it word for word!”

I’m there, “Why is the Earth sweating in that picture?”

Suddenly, it’s Sorcha’s turn to roll her eyes. She goes, “Obviously, Ross, it’s because of all the strain we’re placing on it on a daily basis.”

Honor’s there, “It’s not sweat. Those are actual tears?”

“Oh my God,” Sorcha goes, her hand on her hort. “The planet is weeping because of what we’ve done to it!”

“So what are you planning to do with this placord, Honor?”

“Well, I was going to sit outside Leinster House for one afternoon every week to try to shame our politicians into acting quicker on the climate emergency and make Ireland corbon neutral by 2025.”

“There’s no point,” Honor goes. “I can’t protest outside the Dáil – because you’ve grounded me.”

I look at Sorcha and I notice her expression change to – again, it might not be a word – but remorseness?

She goes, “I was angry with you, Honor, for driving our cors. Which, incidentally, also has a negative effect on the environment. But looking back, maybe I was a little horsh when I said you weren’t allowed to go out for the entire summer.”

“I’m saying I’m prepared to reconsider your punishment if this is how you choose to spend your holidays.”

I’m about to go, “What about me?” suddenly thinking about the World Cup. But Honor shushes me with a look and a tight shake of her head.

“Do you know what’s lovely?” Sorcha goes. “I also drew a crying planet the year I received a first class, runner-up commendation in the Texaco Ort Competition. I wasn’t much older than you, Honor.”

Honor goes, “I want to go to a conference.”

“It’s a children’s conference on the climate emergency. It’s on in September.”

“Of course you can go! Where is it happening?”

“In Japan. I was thinking you could bring me. And I’d obviously want Dad to be there as well.”

Oh my God, I love my daughter.

Honor’s like, “Yeah, it’s actually, like, a series of conferences? The first one is in Yokohama. The second one is in, like, Shizouka. The third one is in Kobe. And the fourth one is in-”

And then she pauses, having obviously forgotten.

She goes, “Are those where the World Cup matches are happening, Ross?”

I’m there, “I honestly don’t know. I’d have to Google them.”

She turns her anger on Honor then. She goes, “Where did you get that placord?”

And Honor goes, “It’s the picture you drew for the Texaco Ort competition. I found it in the attic and nailed it to a piece of wood.”

Sorcha goes, “Ross, you are not going to the World Cup and that is the end of the matter.”

And Honor just shrugs her shoulders again and goes, “Sorry, Dad – at least I tried.”