Hilary Fannin: Where did the time go? What happened to those decades? Siphoned away. Quietly eroded. Pushed silently out to sea 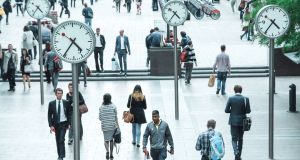 Cats and cars. Children and chat. Winter coats and wooden coffins. Boom, it’s all over’

I telephoned my sister to apologise. We had made a loose arrangement to meet for a walk, and I had to cancel. My brother-in-law answered the phone. He was making biscuits, Anzac cookies, to bring to his photography club. He gave me a potted history of the Australian and New Zealand forces in Gallipoli, along with a list of ingredients, while I waited for my sister to come to the phone. (Oats, butter, flour, desiccated coconut and golden syrup, in case you’re interested.)

My sister didn’t materialise on the end of the landline; turns out she was in the shower. She rang me back 15 minutes later on her mobile, still in the bathroom.

“I’m not coming out,” she said, “until the flour bombs have stopped falling.”

My brother-in-law has been retired for a number of years, and last month my sister got her bus pass.

“It’s brilliant,” she said during a previous phone conversation, also conducted from her bathroom, perhaps because my brother-in-law was making Viennese whirls for his men’s club or meringue nests for his book club.

“Brilliant, I went to Broombridge on the Luas.”

She has a point. You only live once, so why not seize every opportunity you can to explore the planet? I’ve never been to Kerala, or Japan, or Mexico, or Shanghai, or Broombridge either for that matter – hell, there’s lots of places I’ve never been. Maybe there’ll be a beneficent world order by the time I’m 65 and us baby-boomer retirees will get free steamship packages around the watery globe.

Anyway, later that day, in a life veritably crowded with incident, I was sitting in my car during the soap-sud stage of the car wash. (Could I just digress here a moment to say that the endless advertisements on the box for shiny new cars – generally being driven by petulant women flitting to or from moody lovers – are getting to me? I picture myself swooping around corkscrew bends in a glossy hatchback, my heart heavy with regret, my lips slick and pouty, but my spirits greatly cheered nonetheless by the vehicle’s advanced steering function and inbuilt infotainment system, not to mention the giddy amount of horsepower under my sagging posterior. I can’t afford a new car, however. Not for the foreseeable future, or the future after that. Washing the one I already own will have to suffice.)

I like car washes. I like the feeling of dislocation and invisibility you get when the windows are covered in foam and the big green brushes descend like aliens.

During the white-out phase of the wash, I thought about my sister and her husband. I realised that more than 40 years have passed since they met, 40 years since he pulled up outside our suburban house in his souped-up Mini and orange flared corduroys to collect my hippie sister. They married young; my sister wore polka-dot and a floppy hat. They got themselves a tough and tenacious cat called Sunshine, who was balding and had different-coloured eyes and liked to sit on my brother-in-law’s lap while he drove, big raw paws on the steering wheel.

Then the rest of their lives happened. Cats and children came and went, and now it’s 40 years later and he’s up to his elbow patches in desiccated coconut and she’s crouching in the bathroom until she can ambush him with the dustpan and brush, disarm him with with a spray of multi-surface antibacterial eco gloop. And the question I asked myself in the tundra of the car wash, the blizzard of suds crashing down the windscreen, an ominous creaking coming from the roof where I’d forgotten to unscrew the aerial, was: where did the time go? What happened to those decades? Siphoned away. Quietly eroded. Pushed silently out to sea.

Cats and cars and couches. Chalices, children and chat. Winter coats and wooden coffins. Boom, it’s all over. Kaput. Gone.

The rinse cycle was intense, then the machine gave the car a quick blow-dry and, before you could say semi-autonomous super-cruise system, the red stop sign blinked off and the shiny green arrow pointed me and my sparkling, if almost vintage, hubcaps onwards. And, €7 lighter, I was on the road again and raring to go, my existential musings a gritty slick, sluiced down the car-wash drain. Car wash therapy. Cheap at twice the price.