Housework is the big, hairy, sexist elephant in the room

Jennifer O’Connell: 90% of Irish women do housework, compared with just 50% of men 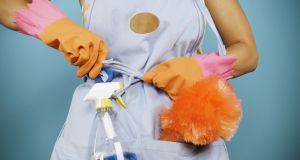 Men need to step up to the plate and do their fair share of housework. Photograph: Getty Images

We need to talk about housework.

To be honest, I’d rather not. In common, I suspect, with the vast majority of the population (with the exception of Instagram cleaning guru Mrs Hinch’s 2.4 million followers), the only thing that bores me more than talking about housework is doing housework.

I’d rather talk about almost anything else: that new dress you got in & Other Stories, the Eurovision, what would happen if you ate dark matter. I enjoy a clean and tidy house; I just don’t much enjoy the process of getting there. I don’t think this is unusual. I don’t know anyone who wakes up on a Saturday morning and thinks, “Oh, lovely. Ironing.”

But we need to talk about housework because it’s the big, hairy, sexist elephant in the room, the one that’s currently sprawled on the couch with its feet up on the coffee table, hogging the remote, and waiting for someone to fetch it a cup of tea.

The idea that all dads are basically some version of Homer Simpson – loyal, lovable, incompetent idiots – has been blown out of the water this generation

The idea that all dads are basically some version of Homer Simpson – loyal, lovable, incompetent idiots – has been blown out of the water this generation. The vast majority of the men I know are involved, evolved, emotionally aware, concerned with their children’s basic needs and social, emotional and psychological development.

They’re much more hands on than their own fathers were. You see them at the school gate, or ferrying kids to afterschool activities. You hear them having involved conversations about how cute their 18-month-old is when she eats a banana.

But here’s the thing, chaps. “Better than your fathers” is frequently quite a low bar. It does not, typically, equate to “as well as your partners”. As the American social psychologist Bernadette Park puts it, a lot of the change over the past generation “is more in ‘the culture of fatherhood’ than in actual behaviour”. In other words, men talk the talk, but too many of them are still not walking the walk.

The reality is that, for a lot of us, modern marriage isn’t fit for purpose anymore. The numbers just don’t stack up. If you need two full-time salaries – as many families do – the workload at home needs to be split somewhere around 50-50. That doesn’t mean 50-50 on every single household chore. It might be 60-40 one week; 30-70 the next. Whatever works, so long as it works for both partners.

Because the evidence at the moment is that, all too often, it doesn’t work for both partners. One new book, All the Rage: Mothers, Fathers, and the Myth of Equal Partnership, by Darcy Lockman, estimates that it will be another 75 years before men do 50 per cent of the housework. An EU report found that 90 per cent of Irish women do housework, compared with 50 per cent of men.

The data from other studies on the division of labour in heterosexual couples isn’t much more encouraging. A 2011 study at the University of Michigan on caregivers and sleep found that “working mothers were significantly and substantially more likely to get up for the night shift than working fathers”.

Women need to stop infantilising their partners. They should stop falling over themselves to say how #blessed they are because he gave them a lie-in

A 2008 University of Cincinnati study on what happens when children get sick concluded that “although men’s egalitarian ideology was positively associated with urgent-childcare provision, men as a whole were less likely than women to adapt their work efforts to familial demands”. Decoding the socio-babble, this means that men may like the idea of themselves as someone who drops everything when their kids get sick; in reality, it’s usually the mothers who do.

If women are not going to go on being exhausted and burnt out by the “second shift” – where they work all day in an office, and then come home and do all of all the domestic heavy lifting – men need to step up to the plate. But women, equally, need to stop infantilising their partners. Lockman makes a compelling case that women should stop being grateful for every little thing their partner does. They should stop falling over themselves to say how “#blessed” they are because he gave them a lie-in, or picked a sick child up from creche, or – my pet hate – “babysat” his own kids.

Gratitude reinforces the notion that the everything that happens in the domestic realm is primarily the woman’s responsibility, and it’s up to her to delegate. It is a form of what she calls “benevolent sexism”, on a par with the claim that women make better carers because they are “made that way”.

And if the prospect of a fairer distribution of labour for its own sake isn’t enough, a 2016 study found that heterosexual couples in egalitarian relationships have sex about seven times a month – more than couples in which either the woman, or the man, takes on the bulk of the domestic graft.