Róisín Ingle: Kamala Harris’s words washed over me like a wave of relief

Kamala Harris and Mary J Blige were in my head. For the first time ages, I felt truly happy 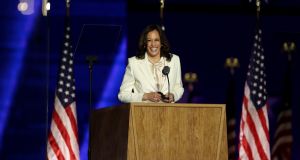 Not for the first time but for the first time as US vice president-elect Kamala Harris walked out on stage to the song Work That by Mary J Blige. As the tune was blasted around a convention centre car park in Delaware, Harris arrived to give her acceptance speech wearing a huge smile and a white trouser suit, a nod to the suffragettes.

It was a Saturday night in 2020 in the middle of a pandemic, a hundred years after women in America had won the right to vote. It would be several decades later before voting rights for black women and men were secured. Now Harris, with her Jamaican father and Indian mother, was, as Blige would have it, “working that”.

Work That. The song had passed me by up until then. But I heard it on Saturday night and then listened to it all Sunday morning. “There’s so many girls/ I hear you been running/ From the beautiful queen/ That you could be becoming/ You can look at my palm/ And see the storm coming/ Read the book of my life/ And see I’ve overcome it.”

The three-minute song was like a musical version of Kamala Harris’s 10-minute speech. To a backdrop of honking car horns, the signature sound of the Biden-Harris campaign, Harris had said: “Every little girl watching tonight sees that this is a country of possibilities. And to the children of our country, regardless of your gender, our country has sent you a clear message: Dream with ambition, lead with conviction, and see yourselves in a way that others may not simply because they’ve never seen it before.”

I alternated between playing the song and the speech until my own beautiful queens – my daughters, delighted with the result, but more interested in the alternative election coverage on TikTok – finally objected.

I took the election party to my bedroom and from my headphones, the words and the music of both women washed over me, like the waves of relief many of us have been experiencing since it became clear that Joe Biden and Harris had indeed “overcome it” and Donald Trump would soon to be on his way. Out of The White House, eventually. But out of our heads too. Out of our thoughts. Out of our minds. Out of our nightmares. Trump has taken up too much space up in our heads, “rent-free”, as the kids say, over the past four years. And the relief that his particular brand of cruel, empathy-free, narcissism had been defeated was a weight lifted, a burden we could finally set down.

It was something to celebrate.

You can, should it need stating, celebrate the end of Trump and simultaneously be aware of and appalled by the fact that more than 70 million people voted for Trump. It’s not just the economy, stupid. Every one of those votes was a vote for racism. A vote for white supremacy. A vote that endorsed inhumanity and misogyny and male chauvinist piggery. They were 75 million votes – and counting – in support of a very different America to the one Kamala Harris and president-elect Joe Biden were standing for. As a friend, a woman of colour, said pointing to how Trump’s base had not diminished but rather swelled: “I would still be afraid of landing in the wrong place in the USA.”

It made me think of Fintan O’Toole’s widely read column from June 2018 about how babies in cages were part of Trump’s trial runs for fascism. As O’Toole said: “Fascism doesn’t arise suddenly in an existing democracy. It is not easy to get people to give up their ideas of freedom and civility. You have to do trial runs that, if they are done well, serve two purposes. They get people used to something they may initially recoil from; and they allow you to refine and calibrate. This is what is happening now and we would be fools not to see it.”

These trial runs for fascism are not just happening in America and they will not be halted by Trump’s exit from the White House. The ugliness of Trumpism will not die with him. It will have another name. It will have another face. But for the weekend that was in it I just wanted to listen to the Mary J Blige song, feeling a kind of jet lag from a week of unsustainable yet unmissable late nights watching CNN’s Magic Wall; the banter of the numbers guy John King and the way he drew an eight (two circles side by side, shockingly); Anderson Cooper and his “obese turtle” Trump comparison (I was glad to see he later apologised for it); and moments like Trump apologist and former Republican senator Rick Santorum visibly blanching after the President of America gave a press conference in which he falsely suggested there was widespread election fraud.

What a week it was. A week when we could forget, for a bit, about Covid-19. A week when something else was more important. Or at least we could decide that it was.

Before Kamala Harris went to work it out in a car park, I had been out myself. I’d left my locked down family, packing prosecco and plastic glasses in my backpack. I met my friend down by the docks, and we cycled together to a spot where other small groups had congregated drinking beer and listening to music.

The November chill seemed to lift for a while. We took off our coats and used them as picnic blankets, sitting on the damp grass looking out at the water and above at people in their apartments. It was a Saturday night in 2020 in the middle of a pandemic. We heard the distant bangs of leftover Halloween fireworks. Strangers said “great night, isn’t it?” to each other. And we meant the weather but we also meant it was a great night to say goodbye and good riddance to a man who had orchestrated trial runs for fascism.

In my bedroom the next morning, listening to Blige and Harris on a loop, I revelled in the fact that Harris, as well as being the first woman in the position, will also the first African-American and first Asian-American vice president in the history of the United States. I thought about how while there were so many more battles to fight, this moment was one to be treasured. I thought of all the women who came before Harris and of all the women who will come after her.

“I may be the first,” she told America and the world on Saturday night, “but I won’t be the last”.

It was a Sunday morning in 2020, in the middle of a pandemic. Kamala Harris and Mary J Blige were in my head and for the first time in what seemed like ages, I felt truly, properly happy.

“Don’t worry ‘bout who’s saying what/ It’s gonna be fine/ Work what you got.”