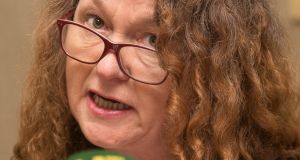 Described by many as a force of nature, Philomena Canning – independent midwife, advocate for women’s choices in childbirth and campaigner for women’s rights – believed passionately in the professional autonomy of midwives. She was also a tireless and fearless champion of women’s rights to have their babies at home or in non-medical settings.

In a country where a obstetrician-led model of maternity services is dominant, she empowered women in childbirth to draw on their natural strengths. “Trust me”, she would say at just the right time, “you were born to do this”.

Canning grew up the third of nine children in the village of Glenvar, Co Donegal. She was born at home, as most babies were then, and as a child absorbed the strong regard young Donegal mothers had for their local midwives.

Following her education at Loreto College, Milford, Canning trained as a nurse and midwife in Whittington Hospital in London and worked there for a time. She travelled first to work in Saudi Arabia and then to Sydney. While in Australia, she began to question the rigid hospital-based approach to childbirth and opted to move to Alice Springs to run a health centre for aboriginal women. Over her 4½ years there, she was inspired by how women coped while giving birth in simple, rural settings. It was an experience that would shape her future career.

Canning returned to Ireland in the late 1990s, first working as a researcher for the Pavee Point Travellers Centre in Dublin and taking a masters in public health at Trinity College Dublin. She then established herself as an independent midwife available to women who wanted to give birth in their own homes in the Dublin region. Krysia Lynch, chairwoman of the Association for Improvements in Maternity Services in Ireland, said that for Canning, the approach to childbirth was not just an intellectual debate but “a universal right for women to be enabled, empowered and supported during childbirth”.

Combative, determined and a stickler for detail, she regularly went head to head with obstetricians in debates about childbirth practices on radio programmes. She also spoke to midwifery students as a guest lecturer and presented papers at international conferences. She was not afraid to challenge a health system which in theory offered women choices in childbirth but in fact often made such choices extremely difficult to make – either by not funding home births or by not giving midwives working outside the hospital system professional autonomy in decisions about what constituted a risk during childbirth.

Many of the women whose babies she delivered became strong advocates for change – some bringing court cases against the State for not funding home births and others training to become midwives.

With sociologist Marie O’Connor, Canning co-founded the National Birth Alliance in 2002 as an attempt to reform an overmedicalised birthing culture in Ireland where Caesarean sections were on the rise. In 2017, she travelled to the Convention on the Elimination of all Forms of Discrimination Against Women in Geneva to explain how the active management of labour [a worldwide hospital-based interventional approach to speed up labour which originated in the National Maternity Hospital in Dublin] was an abuse of women’s human rights. Canning was extremely proud that in its concluding observations, the convention expressed concern that women were “made to deliver babies within eight hours of hospitalisation” and called on Ireland to provide maternity services that respect the natural birth process.

Canning also campaigned for midwives to be recognised as an independent profession to nurses as is the case in countries including Britain. In 2014, she decided to set up two independent birth centres in south Dublin. But, just as she was advancing her plans, the HSE received a complaint against her and suspended her licence to practice. Although her professional indemnity insurance was restored in 2015 and her midwifery practices were exonerated by independent experts, she said she had “lost everything”.

Canning subsequently took a case against the HSE for damages to her practice, her livelihood and her good name but, in the meantime, she became ill with ovarian cancer.

Even though she was undergoing treatment for cancer, Canning co-founded Midwives for Choice in advance of the abortion referendum in 2018. She strongly believed that the Eighth Amendment in the Irish Constitution was a huge impediment to women’s rights in pregnancy and birth.

With friends and family by her side, she spent her last months settling her case against the HSE so that she could afford expensive cancer treatment. Friend and fellow activist Ciara Considine called her “a warrior who stood up for what was right at all costs. Mothers and activists for birth and reproductive rights country wide will be forever in her debt.”

Philomena Canning is survived by her siblings, Mairead, Mary, Noel, James, Anne-Colette, Malachy and Oonagh. Her brother, Paul, pre-deceased her.