Hilary Fannin: Pets don’t understand why owners are on Zoom calls in their trackies 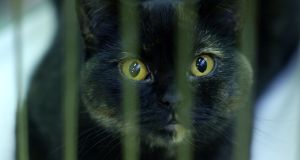 Let me out. The expert advice is to make sure your pet has something enjoyable to do when you’re busy. Photograph: Moya Nolan

Well, would you look at that. We began our Covid countdown on St Patrick’s Day and, hey presto, it’s June already. I don’t know about you, but I’m really struggling with the passage of time. I’m beginning to suspect that the days are taking illegal substances to enhance their performance, such is the manic speed of dawn till dusk in these pandemic days.

Without the metronomic squeak of a swivelling bar stool to adhere to, or the six-weekly trance of peroxide hitting one’s withering scalp, it seems the concept of time entirely loses the run of itself.

I was recently in touch with a friend who lives in lockdown London. She sent me a photograph of her cat, who was wearing a lampshade over his head. Well, not a lampshade exactly – a cone-shaped thing that looked like a lampshade.

On the first night of what turned out to be a cat-sitting saga, my husband rang me at 2am to say the kitten was lost

“What’s wrong with the cat?” I texted.

“He’s having trouble with his paws. We’re waiting for the test results – it might be an autoimmune condition,” she replied. “He’s not allowed out of the flat. I’ve to watch him day and night.”

To be helpful, I told her that my sister’s deceased Labrador had paw problems too, caused by an allergy to grass, which the vet also described as an autoimmune condition.

The dog’s paws would go pink when she walked along a newly mown kerbside. Eschewing my idea of buying her four little shoes, my sister chose to follow professional advice instead, getting the dog’s medication from the local chemist and keeping it in the fridge.

Then the flatulent growler, who was improbably named Phoebe and also had a dicky hip, a touch of arthritis and a pretty permanent expression of confusion and regret on her little doggy face, began to sprout unsightly lumps on her undercarriage. The pharmacy bills were mounting.

One evening, after a particularly libatious family dinner, some of us, namely her less sentimental siblings (of whom I was one), suggested to my sister that the dog had had her day, so to speak. You’d think we’d asked her to sacrifice her firstborn. We were digging her pastry forks out of our foreheads for weeks afterwards.

Anyway, thanks to the wonders of medical science and my sister’s unstinting devotion, the malodorous Phoebe finally died of old age, having completed a masters in antique restoration and become a damn fine Sudoku player.

The flat where the cat lives, and reigns, is next to a high, mossy wall, on the other side of which is a graveyard

Meanwhile, back in sweltering London, the cat with the lampshade on his noggin was suffering complications.

Apparently the vet thought that the sweaty-pawed cat might be feeling stressed.

My friend is extremely fond of that cat. It’s a long and complicated story, and I won’t bore you with all the details, but when the cat was a kitten my husband went to London to cat-sit while my friend and her partner went abroad on holiday.

The flat where the cat lives, and reigns, is next to a high, mossy wall, on the other side of which is a graveyard. On the first night of what turned out to be a cat-sitting saga, my husband rang me at 2am to say the kitten was lost but that he could hear a faint whimpering from among the tombstones on the other side of the wall.

It wasn’t a simple matter – stumbling around in the dark trying to pole-vault into a cemetery rarely is – but eventually, with the help of a six-foot plank, the dear little kitty was finally rescued. By way of thanks, on the following night the grateful moggie hopped up on to the bed where my spouse was sleeping, and left him a half-dead mouse and a cadaver from 1784. (Oh all right, the corpse is an exaggeration, but the mouse wasn’t.)

Anyway, lockdown restrictions might now be playing with the minds of our pets, and my mate’s perspiring-pawed pussycat may not be the only one suffering from a psychosomatic condition.

According to my diligent research, pets are getting confused by the new normal of working from home: accustomed to being the focus of undivided attention when hanging out together in the crib, they don’t understand why their owners are on a Zoom call with their trackie bottoms on instead of down on all fours looking under the couch for the tennis ball.

The expert advice is to make sure your pet has something enjoyable to do when you’re busy. Something chewy to chew on is one recommended option; maybe your leather-look winter boots – which, let’s face it, you’re probably not going to need anyway once the second wave arrives.