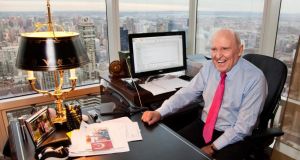 Jack Welch at his office in New York in 2011. ‘I detest bad businesses, because bad businesses crumble people,’ he wrote in his memoir. Photograph: Brooks Kraft/Corbis/Getty

Jack Welch, who has died aged 84, was a titan of US industry in the last quarter of the 20th century. As chairman and chief executive of General Electric (GE) for 20 years from 1981, he gained worldwide respect in the business world as a manager and leader of one of the most successful industrial companies of the era.

His prowess at reducing employee numbers attracted the nickname “Neutron Jack”, referring to the neutron bomb, which would wipe out people but leave property unharmed. His example set the trend for the “downsizing” that swept through the business world on both sides of the Atlantic during the 1980s and 1990s. It also created a goldmine for shareholders – by the time he retired in 2001 GE shares were worth more than 30 times what they had been when he took up the reins.

He pursued a small number of objectives with single-minded passion and built a high-quality management team. Both required ruthlessness

Welch came from an Irish working-class background – his father, John snr, worked on the railways – and was born in Peabody, Massachusetts. As a child Jack lacked confidence and had a bad stutter. But his mother, Grace, pushed her only child, building his confidence and instilling a determination to win at whatever he was engaged in. “She kicked my ass when it was important and she hugged me when it was important,” he said of her.

He studied chemical engineering at the University of Massachusetts and went on to gain a doctorate from the University of Illinois in 1960. It seems an unlikely grounding for a captain of industry, but when he moved to GE on completing his PhD, he lost no time climbing the corporate ladder. The group appointed him its youngest vice-president in 1972 and he became vice-chairman in 1979. That was a precursor to taking over the top job two years later, when he set about transforming the sprawling, sleepy bureaucracy.

He adopted two guiding principles – pursue a small number of objectives with single-minded passion and build a high-quality management team. Both required ruthlessness. The first led GE to strip away many traditional but poorly performing manufacturing businesses, instead building a presence in television and the media (through the NBC network) and financial services. Welch popularised what became a common big-business strategy of aiming to be in at least second place in all of a company’s markets.

The second principle required a continuing cull of the least able managers. The chief executive instigated a ruthless analysis of the management cadres; and he insisted that the bottom 10 per cent each year should be fired.

In his first five years the GE headcount fell by more than 100,000 people, a quarter of the workforce. Welch admitted it was unpleasant firing people and closing down plants, but excused his ruthless approach on the grounds that this would achieve the best possible long-term financial performance, and that the managers who were fired were given generous pay-offs and time to find more suitable jobs.

He was entitled to a hatful of perks, such as tickets to the Met, the New York Yankees and Wimbledon, an apartment on Central Park in New York and use of the corporate jet

“I detest bad businesses, because bad businesses crumble people,” he said, reflecting in the memoir he produced on retiring in 2001 that he should have changed the group much faster. “I should have torn down the structures sooner, sold off weak businesses faster than I did. This so-called ‘Toughest Boss in America’ wasn’t tough enough.”

His record was not without failures – most notable being the ill-advised purchase of a Wall Street brokerage, Kidder Peabody. But it was more successful than any of his contemporaries, so much so that publishers paid $10 million for his book, published in the US as Straight from the Gut but more prosaically in the UK as What I’ve Learned Leading a Great Company and Great People. The fee was donated to charities, as the multimillionaire Welch had no need of such small change.

The book dwelt on his love of golf, but otherwise was preoccupied with how to build management teams, with confident people in the right jobs.

Welch is survived by his third wife, Suzy (nee Wetlaufer), a former editor of the Harvard Business Review, whom he met when she went to interview him in 2001. Welch’s second wife, Jane (nee Beasley), whom he had married in 1989, filed for divorce soon afterwards.

This set off a frenzy among the scandal-obsessed business press because her claim revealed astonishing largesse on the part of GE towards its retired boss. It turned out that he was entitled to a hatful of perks, such as tickets to the Met, the New York Yankees and Wimbledon, an apartment on Central Park in New York and use of the corporate jet.

In the wake of the frauds at Enron, WorldCom and other US groups, the retirement deal attracted the attention of the financial authorities and threatened to tarnish the hero’s image. But Welch rescued his reputation by renouncing the extravagances.

He is also survived by two sons, John and Mark, and two daughters, Katherine and Anne, from his first marriage, to Caroline (nee Osborn), which ended in divorce in 1987.