Stone-fruit season: Easy ways to sweeten up a whole meal

Jess Murphy: You’ll be surprised the difference apricots or peaches will make to each course 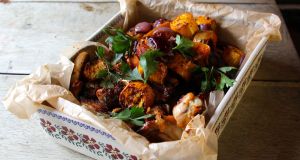 Apricot chicken: I recreated this beauty with a lovely Carlow free-range chicken and spices

“Well, you didn’t lick it off a stone” as they say here in the west.

Possibly my favourite season, of all the microseasons, is stone fruit time, although I do have haptodysphoria, the odd sensation felt by certain people when handling peaches or other fuzzy surfaces. That means I can’t handle velvet either.

I was talking recently to a great pal who works in an Irish bar in Hiroshima. When I asked him what was on the menu, he told me he had an Irish stew and apricot chicken on. I laughed so hard at this, but I also knew I had to recreate the chicken, mostly because it was also my dad’s number one slow-cooker meal back in the late 1990s. I decided to recreate this beauty with a lovely Carlow free-range chicken, and some spices and apricots, to make it better than before.

Irish sweetcorn is absolute bliss and chargrilling it and making a lovely nectarine salsa with it only makes it better. Salsa will never fall out of fashion, especially when this corn and stone fruit one is matched with plaice, the most affordable fish for a family. Eastern Seaboard restaurant in Drogheda makes a superb plaice katsu, and it is also great for ceviche, or a classic fish-finger sandwich.

If you love ice-cream sandwiches as much as me, I suggest you check out my pal and Aussie legend Terrie, who owns Happy Endings Ice Cream and Desserts in Spitalfields, London. It must be the ultimate ice-cream sandwich for Instagram inspiration.

Method
1 Put the chicken pieces in a bowl and season them with salt and pepper. Mix the ingredients for the marinade together and pour it over the chicken. Leave the chicken to marinate for at least an hour in the fridge, but preferably overnight.

2 Remove the chicken from the fridge half an hour before you want to cook it. Preheat an oven to 180 degrees Celsius, or equivalent.

3 Spread the onions, courgette, apricots, and the garlic and sage from the marinade, over the base of a roasting tin and season with salt and black pepper. Drizzle the olive oil over the top and mix thoroughly so everything is well coated. Put the chicken on top.

4 Roast in the oven for 45–50 minutes until everything is tender and slightly charred and the chicken is cooked through.

Method
1 Make the salsa by charring the corn either on a grill or in a heavy-bottomed skillet pan. Shave the kernels from the cob and add them to a large bowl along with the diced nectarines, diced cucumber, minced jalapeno, diced red onion, and coriander. Season with salt and pepper.

2 In a separate bowl, whisk together the olive oil, lime juice, water, garlic, honey and salt. Pour this over the salsa and stir to coat.

4 Season the fish fillets with salt and pepper. Put them in the pan, skin-side down. Sear for two minutes and then gently flip them over. Lower the heat to medium and cook through.

5 Serve the plaice topped with the fresh salsa, and a side salad or rice would be good too.

Method
1 For the sandwich base preheat the oven to 150 degrees Celsius, or equivalent. Line two baking trays around the size of an A4 sheet of paper with parchment paper, making sure in advance that the trays that will fit in your freezer.

2 Sieve the ground almonds, icing sugar and salt together and set aside.

3 Whisk the egg whites in a stand mixer until foamy, add the cream of tartar and 50g of the caster sugar and whisk again until it forms soft peaks.

4 Fold in the vanilla and the ground almond mixture, mixing until there are no pockets of almond left.

5 Divide the mixture between the two baking trays and spread into an even layer.

6 Bake in the oven, rotating the trays every 10 minutes, for 25-30 minutes, until the edges pull away from the tray and the centre is set. Leave to cool.

7 Flip one tray on to a cutting board and carefully remove the parchment paper. Line the tray with parchment again with some overhang on two sides and slide the base back on to the tray, upside down. Repeat with the other tray, keeping it the right way up. Set aside.

8 Make a peach puree by combining the peaches with 75g of the sugar, the lemon juice and two tablespoons of water in a medium-sized saucepan.

9 Cook on low heat until the peaches are soft. Add to a blender and blitz to a smooth puree. Leave to cool.

10 For the ice-cream combine 100g of the sugar with 200ml water in a small saucepan. Stir over medium heat until the sugar is dissolved then turn the heat up and bring to a boil. Don’t stir it again.

11 Cook the sugar syrup to thread stage, between 110 and 112 degrees Celsius. If you don’t have a sugar thermometer, test the sugar by letting a few drops of syrup drip from a spoon – when ready it will form thin threads in cold water.

12 Whisk the egg yolks in a stand mixer on medium speed. When the syrup reaches thread stage, whisk the yolks on high and pour the sugar syrup down the side of the bowl on to the yolks, whisking until cool.

14 Add the peach puree to the ice-cream and gently ripple it through. Pour on to the prepared upside-down base and freeze overnight.

15 The next day, slide the other base on top of the ice-cream, making a giant sandwich. Remove this from the baking tray carefully and cut into handy sandwich sizes. Store wrapped in the freezer until ready to serve.

Driven batty: The scary reality of bats in your house
10