Sleep has become the preoccupation of my generation 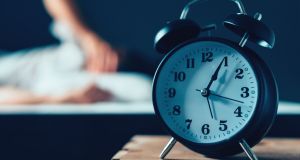 In keeping with the mood of our times, I am sleepless.

The supply of little blue pills I bought over the counter in America is running low. I could buy more on eBay, but is it legal? I worry this question over in my mind in the small silent hours. The blue pills which are supposed to help me sleep are now on one of the many lists of things keeping me awake. These include end-of-term to-do lists; work to-do lists; lists of all the ways I have disappointed people; and lists of new things to worry about.

Items on this last list propagate like daisies in an untended garden. Tonight, they include something I read about salmon returning to Irish waters with bleeding skin and ulceration, whether I did actually put the school tracksuits in the tumble dryer, if the planet will keep going long enough for my children to become grandparents, and why the radiator in the playroom is hissing even while the heating is off.

Sleeplessness is this year’s gluten intolerance: it’s the latest, tediously fashionable affliction of the worried well

One evening, I run the matter of the procurement of blue pills by a friend in the medical field, who tells me the legality or otherwise of the pills bought on the internet should be the least of my worries. Have some camomile tea, he suggests, which is like offering a wine gum to someone craving a drink.

But you don’t want to hear any of this. Sleeplessness is this year’s gluten intolerance: it’s the latest, tediously fashionable affliction of the worried well. The only thing more boring than your own insomnia is everyone else’s insomnia. Knowing this doesn’t stop me telling people though.

You could be in the perimenopause, another friend – a reliably knowledgeable and direct sort – says instantly when I say I’m not sleeping.

I said the PERImenopause, he replies. I nod thoughtfully, and then go away and look it up. How have I managed to get into my early 40s, a reasonably well read person, and not have more than the vaguest awareness of the perimenopause? Perimenopause, according to Dr Google, “also known as menopause transition, begins several years before menopause. It usually starts in a woman’s 40s, but can start in her 30s or even earlier. The average length of perimenopause is four years.” Oh woop-de-doo. The list of symptoms range from the familiar, to the troubling, to the nope-I-can’t-go-there-yet. I self-diagnose as not-there-yet, and go back to googling plain old insomnia.

I wonder if it is Google’s fault, this endless pathologisation of things that are just part of the human condition? I’ve had periods of sleeplessness since I was 12, but as there was no Google then, I sipped camomile tea and accepted not sleeping as one of those things that just happened sometimes.

Now there’s a whole industry around tackling and – it sometimes seems – fostering sleep anxiety. It even has a name, coined in a 2017 study published in the Journal of Clinical Sleep Medicine: “orthosomnia”, an unhealthy obsession with achieving perfect sleep.

We orthosomniacs are bombarded with articles about sleep debt and sleep rhythms and sleep hygiene (no blue light in the bedroom; cool, dark room; wake gently at the same time every day by an alarm that coincides with our REM cycles). We’re sold sleep gadgets. At least one of these, the many varieties of sleep tracker that monitor our sleep, only make us more anxious, according to research published recently. People who wear them become competitive about their data, and stay in bed for longer, a self-sabotaging strategy.

I wore a clinical-grade sleep tracker last year for a few nights, as part of a documentary I was presenting on stress. For once, I was gratified to find myself tossing and turning, my brain wheeling with the usual anxieties and regrets and fears. But when the results came back from the lab, I was dismayed. Technically, the sleep expert told me, that was not a bad night’s sleep. It was terrible, I insisted. I woke constantly. Maybe it felt like that, he said. But if I added up all the periods where I was asleep, I’d see that I got about six hours. You’re fine, he added kindly. Based on this data, you don’t have insomnia.

I felt cheated. I’ve been a bad sleeper so long, it’s an important part of my identity. Who was this expert to tell me I’m perfectly normal?

I am lying in bed, thinking about how aspirational sleep has become the preoccupation of my generation. I’m also thinking about how much I’d like some, when the door opens and a bleary-eyed five-year-old comes in with an armload of teddy bears. She can’t sleep, she says. Why not, I ask. Because Sparkle is gone.

Sparkle is one of a large collection of Beanie Boos without which there can be no rest. I go up to her room and find Sparkle balled up in her sheets, and when I bring it down, she announces that she’ll go back to sleep now, in my bed. And, just like that, she does. There’s a lesson in that, and if I wasn’t so tired, I’m sure I’d be able to work it out.