Mike Thomson gets his first whiff of success with his hand-made, raw-milk cheese 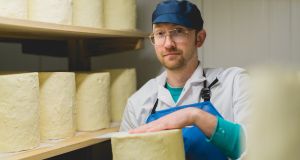 Mike Thomson first became interested in cheese-making when he worked in the renowned Arcadia Deli on the Lisburn Road in Belfast. Photograph: Joe Laverty

The first time I tried Young Buck, Mike Thomson’s raw-milk blue cheese, was not in its home city of Belfast, but in Berlin. There it sat, a softly mottled wheel of white and gold, on a specialist cheese stall in Markthalle Neun, in Kreuzberg – one of Berlin’s top food destinations. The Young Buck tasted rich and smooth, buttery yet clean: somewhere between Stilton and Roquefort, but with an exuberant personality all its own. I decided right then that I would seek it out as soon as I returned to Ireland.

Mike Thomson, who makes Young Buck, first got a whiff of his destiny when he worked in the renowned Arcadia Deli on the Lisburn Road in Belfast. Thomson realised that there was nobody in Northern Ireland making locally sourced, hand-made, raw-milk cheese. He was determined that he would be the person to resurrect the centuries-old tradition, but first he had to learn how.

Thomson won a bursary to study at the School of Artisan Food across the water in Nottinghamshire, where he spent a year “pure geeking out on cheese”, as he puts it. After that, he spent a further year managing the cheese-making process at Sparkenhoe farm in Leicester. Now he had the know-how and the practical experience, and when he returned home to Belfast in 2013 he knew exactly the kind of cheese he wanted to make. Young Buck – as yet unnamed – was already a glint in his eye. But he had no start-up capital to get the whole operation off the ground, and the banks weren’t interested in his odd cheese-making plans.

So Thomson turned to the crowd-funding platform Seedrs. Within three days, he had raised £80,000 (€89,000). He converted a small garage on the outskirts of Newtownards, Co Down, into a dairy, made an arrangement for milk supply from a local farmer on the nearby Craigantlet hills, and put up a sign saying “Mike’s Fancy Cheese”.

Young Buck was always the name that stood out. It sounded Northern Irish, it was fresh and new and a bit different, not old world

Soon the wooden shelves of the dairy began to fill with slowly maturing wheels of his Stilton-like creation. The only question now was what to call it. “I sat down with my childhood friend, Tony Moore, and we had a kind of free association therapy session, in which we came up with loads of names, which Tony wrote down in a scrapbook,” says Thomson.

“Then we stuck the best names on the door of the fridge, to help us decide. Young Buck was always the name that stood out. It sounded Northern Irish, it was fresh and new and a bit different, not old world.”

The cheeky, playful name helped this young contender quickly become one of the most admired raw-milk cheeses in Ireland, Britain and beyond. It started popping up on the menus of Michelin-starred restaurants and on the cheese counters of top delis. You could meet it in France, Germany, Belgium and Italy too. Soon the awards began to roll in. And in December 2018, Thomson opened his own specialist cheese shop – called Mike’s Fancy Cheese, of course – in Belfast city centre. Young Buck is the star of the show, but he also sells many other raw-milk Irish cheeses.

The delightful honk of the combined cheeses as you walk into the cool of the shop greets you like an old friend. “The shop is our attempt to do a bit of Brexit-proofing,” says Thomson. “The idea is that what business we might lose [after Brexit] , we make back up with the shop.”

The physically demanding work of making Young Buck happens 10 miles away at the dairy in Newtownards. On the day I visit, Thomson’s van – emblazoned with the hashtag “keep it mouldy” – is pulled up outside, along with the vast stainless steel vat on wheels that he uses to transport fresh milk from the farm to the dairy, three times a week.

In his white cheese-maker’s wellington boots, Thomson walks me through every stage of the process, from cutting the curds, through the salting, rubbing and turning of the cheese, until we reach the ageing room where dozens of wheels of Young Buck sit at various stages of maturity.

The smell of ammonia in the room, given off by the ripening cheese, is eye-wateringly strong. But Mike Thomson doesn’t seem to mind. He’s too busy checking each wheel, pointing out the beautiful pattern of white and brown and orange moulds that fur and speckle the rind.

His dream of creating the North’s first raw-milk hand-made cheese in decades has been fully realised, and you can tell how much he enjoys keeping it mouldy.