‘Oh my God,’ Honor goes, ‘there’s a focking horse in the gorden!’

Yeah, no, I bought a racehorse, but it’s not for Honor – it’s for my old school’s honour 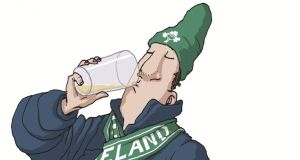 “No,” Sorcha goes – and she says it just like that.

She’s there, “No, as in no. You are not buying a racehorse.”

What she doesn’t know, of course, is that I already have? Yeah, no, Ronan rode it out here from the Bridge, because it was obviously too big to fit in a taxi. It’d probably be wise to keep Sorcha away from the windows for now.

This cuts literally no ice with her. I don’t know why I thought it would. She goes, “Ross, there are far more important things in life than what secondary school you went to,” which is rich coming from the girl who had Honor’s name down for Mount Anville 15 minutes after she got the two lines on the pregnancy test.

I’m obviously having no luck so I decide to change the angle of attack. Once a 10, always a 10.

“Don’t forget,” I go, “there’s the whole social dimension to owning a racehorse. I’m talking about Christmas at Leopardstown. Paddy’s Day at Cheltenham. Hanging out at the Galway Races with the likes of the Seoiges and Pippa O’Connor.”

Pippa O’Connor is her girl crush.

I’m there, “You never know, you two might even become bezzy mates.”

I can see her resistance weakening.

She goes, “Okay, just promise me that you won’t do anything until I’ve had time to think about it.”

I’m there, “Yeah, no, fair enough. Maybe stay away from the window there, Sorcha.”

And that’s when I hear this high-pitched scream from Honor upstairs. “Oh my God,” she goes, “there’s a focking horse in the gorden!”

I’m there, “She’s probably just having a nightmare. Did you see Pippa has a new book out? I was thinking of buying it for you for Christmas.”

I pat her on the head and I go, “It was just a dream you had, Honor. Just a crazy, crazy dream.”

But Sorcha has made her way over to the window and now she’s looking out.

The horse is eating her Sweet alyssum.

Sorcha goes, “You already bought it? I can’t believe you bought it without consulting me first!”

I’m like, “The thing is, Sorcha, the dude who was selling it – he was on the same Junior Cup team as me – he needed an answer straight away.”

Honor opens the back door and runs out into the gorden.

Sorcha goes, “Honor, be careful!” but the girl is totally fearless.

Up to the horse she morches and storts petting his nose and talking sweetly to him.

Sorcha’s there, “You haven’t thought any of this through.”

“Ross, you don’t know the first thing about horses.”

“Whatever I need to know, I can either ask Ronan or I can Google it.”

“Where is he going to stay?”

“Grass. Flowers. Whatever’s out there. Then, at night, I was thinking we could maybe stick him in the Shomera.”

“My parents live in the Shomera, Ross.”

She goes, “No,” whipping out her mobile phone.

“I’m going to ring around and see can I find a stable.”

I walk over to Honor, who’s hugging the animal’s neck and telling him that she’s got the best dad in the entire world. It’s actually a lovely thing for me to hear – great for my confidence – which is why I hate bursting her bubble. But I end up having to?

“Yeah, no, I know you’ve been at us to get you a pony for Christmas, but it’s not actually for you?”

“Yeah, no, you tried that when we refused to give you the money to go skiing during midterm. They told you then, Honor – they’ve got bigger fish to fry.”

“Just calm down, will you? Look, we’ll see about maybe getting you a pony for your birthday. Like I said to Sorcha – there’s room in that Shomera for more than just her old pair. But this actual horse . . . is mine.”

“Well, mine and JP’s, Oisinn’s, Fionn’s and Christian’s. We bought it as port of a syndicate.”

“Because Blackrock College have one – and obviously we want to beat them.”

“Oh my God, Dad, there are more important things in life than what secondary school you went to.”

I might remind her she said that next time the Mount Anville fees come due.

I’m there, “I’ve heard that argument made,” walking around the back of the horse, “but I don’t believe it.”

She goes, “So is this, like, your midlife crisis?”

In that moment, the thing suddenly bucks, kicking me in the chest and sending me staggering backwards across the gorden and into the fence. I haven’t been hit that hord since the night I walked into Clohessy’s in Limerick and shouted, “Mint juleps all round!”