Writer was insightful about behaviour and never avoided darkness or controversy 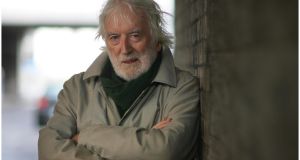 Tom MacIntyre: viewed himself as a seer or shaman. Photograph: Bryan O’Brien

Tom MacIntyre, the acclaimed Irish playwright, poet, short story writer and novelist, has died following a long illness. Best-known for his ground-breaking plays, most of which were premiered at the Abbey Theatre in Dublin, McIntyre was widely recognised for his ability to push the boundaries for actors, stage and audience. Critics have said that his work created new theatrical forms and language and brought physical theatre to the Irish psyche, particularly with his play, The Great Hunger.

His collaboration with theatre director Patrick Mason and actor Tom Hickey for the Abbey production of The Great Hunger in 1983 was one of the high points in his artistic career. In total, 16 of his plays – including Dance for Your Daddy (1987), Sheep’s Milk on the Boil (1994), Good Evening, Mr Collins (1995) and What Happened to Bridgie Cleary (2005) received their world premieres at the Peacock Theatre, the smaller downstairs theatre at the Abbey. And, Mason, Hickey and MacIntyre were fondly referred to as “the three lunatics in the basement” by the Abbey staff.

Hickey who performed in many MacIntyre plays said the Cavan-born playwright was very insightful about human behaviour – never avoiding the darkness or the controversial. “He was also an expert at understanding physicality in the role of a character. He wasn’t the easiest man to deal with. But if you made an outrageous suggestion in rehearsals, he’d use it if he could.”

MacIntyre won the Stewart Parker award for Caoineadh Airt Uí Laoghaire in 1999 and The Irish Times/ESB Irish Theatre Awards for best new play for The Gallant John Joe in 2002. An accomplished Irish scholar, he also published several volumes of poetry and short stories, the novel The Charollais (1969) and Through The Bridewell Gate: A Diary of the Dublin Arms Trial (1971). He was made a member of Aosdána in 1991.

Growing up in Bailieboro, Co Cavan, the second of five children of primary school teachers Philip MacIntyre and Anne Gillick, he soaked up the ancient mythology and folklore of this Border county while immersing himself in his locale. He had a lifelong passion for hurling and played for the Cavan senior football team in 1952 and 1957.

Following his secondary school education in St Patrick’s College, Cavan, MacIntyre studied English literature at University College Dublin. He then taught English and history at Clongoes Wood College for a number of years. Former taoiseach John Bruton was one of his students and he described MacIntyre as “unconventional, irreverent but also a very kind person”.

He married American-born Peggy McCarthy in the early 1960s and had five children. However, he abandoned family life in the early 1970s with considerable cost to his young wife and children. Initially, he went to the United States as a visiting lecturer at the University of Michigan and Williams College, Massachusetts, but then returned to Ireland to live for four years on Inishbofin Island with an American student 20 years his junior, the writer Deborah Tall. Their five year-relationship is described in her book Island of the White Cow.

Throughout his life, MacIntyre viewed himself as nothing less than a seer or shaman, wearing the title as much as a curse as a badge of honour. His writing traversed the layers of Irish history from Celtic times through British colonisation right up to rural Catholic Ireland of the 20th century, capturing the often brutal impacts of institutional power and sectarianism on individuals.

His biographer, Justin O’Brien, says that MacIntyre’s writing “put the nation in the psychiatrist’s chair and forced people to reflect on how they lived their lives today with the consequences of hidden undercurrents”. He also was a firm believer in ghosts and spirits and encouraged young writers to pay attention to their dreams and allow their energy into their lives and work.

On receipt of the 2001 Irish Funds Literary Award from his long-term friend, Seamus Heaney, he said, “storytellers always need courage and with a story that is worth telling you are entering the shadow land and you may or may not come out alive”.

In a 2013 interview, he said, writing is at its core “a way of being, it’s a way of praying. It’s a journey, an interior journey of no trivial proportions. It’s probably true to say . . . for me. It’s a soul journey.”

In 2012, the Abbey celebrated his legacy with a tribute night of stories and readings of his plays. A portrait of MacIntyre by Colin Davidson was unveiled in the Abbey Theatre in 2013. He and his partner of almost 20 years, Celine McAdam, married in 2015.

Tom MacIntyre is survived by his second wife, Celine McAdam, his five children, Deirdre, Darragh, Donal, Desmond and Tadhg from his first marriage to Peggy McCarthy, who also survives, and 13 grandchildren.