The natural childbirth movement has a lot to answer for 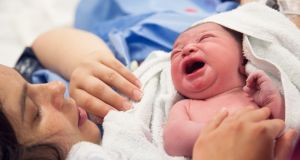 This diminishing of all women’s pain during birth, as well as the complications that do often arise, is a legacy that lives on. Photograph: iStock

“She did it all herself! No drugs!” I had to smother a scoff as I listened to this phrase uttered by a man I know, followed swiftly by a smug smile pinching its way across his face.

His wife had given birth a few days before, and he was heaping praise upon her “Trojan effort” and “steely resolve” in bringing their child into the world without the helpful effects of pain medication.

It isn’t the choice to go without pain meds that irked me, and his pride in his wife’s achievement in bringing a new human being into the world is certainly nothing to be scoffed at. Rather it was the metric by which he judged her achievement as a mother. It reflected that insufferable attitude that still inheres towards women – often furthered by women themselves – that the measure of a good mother is how willing she is to get up on a cross and experience agony.

All pain relief entails risk. Why is epidural the only form of pain relief whose risks are discussed in such detail?

It has its origins undoubtedly in Christian philosophical ideas, and Kant has some input too, but the idea that sacrifice is a vehicle of love, and that a noble way of expressing love and commitment to a person, cause or idea is to bear as much pain as possible in the name of it, is a common feature of womanhood.

The “natural birth” movement eschews and encourages women to eschew the benefits of technologies such as drugs and Caesarean section at a philosophical level. It views these things as bad except as a very last resort, and argues that women’s bodies are naturally responsive to the deep, instinctual rhythms and impulses of vaginal birth.

Anyone who wants to give birth without medication should of course do it, provided they also make provision for any complications that could arise – natural birth isn’t a problem and women’s choices should be respected. The problem is the proliferation of the attitude that having an epidural is the first failure a mother can inflict upon her child, or that undergoing a natural birth is in some way mothering or “womaning” better.

In Push Back: Guilt in the Age of Natural Parenting, obstetrician and gynaecologist Dr Amy Tuteur criticises the natural birth movement at length. All pain relief entails risk. Tuteur asks why epidural is the only form of pain relief whose risks are discussed in such detail – the risk of a baby being harmed by an epidural is theoretical. The risk of a baby being harmed by attempted vaginal birth by a mother who has previously had a Caesarean section is very real and far greater than any potential risk of epidural.

If risk is what really matters, why are natural birth advocates encouraging the latter but demonising the former? Tuteur laments that calculated risks that benefit mothers are not considered valid, when the mother’s wellbeing during and after birth has a material impact on the baby’s wellbeing.

Philosophy is in part an incredibly useful tool because it necessitates constantly questioning where ideas come from, no matter how established they may be, as well as examining the merits of their content. The only thing bad ideas need to become standardised is passive acceptance and time.

Although the natural childbirth movement as we know it now is responsible for many beneficial and important changes – such as the opening of delivery rooms to male partners – it started with British obstetrician Grantly Dick-Read, who was a eugenicist and concerned by what he observed as a reduced birth rate among white middle-class women and increased rates among non-whites.

Childbirth is not inherently safe – obstetrics, anaesthesia and C-sections have made it safe

Dick-Read argued that “primitive” women did not experience pain in childbirth. The pain, he lied, was in the minds of “overcivilised” upper- and middle-class white women. His aim with this shaming tactic was to encourage women to have more children, and delegitimise their fears around birth and pain. This diminishing of all women’s pain during birth, as well as the complications that do often arise, is a legacy that lives on.

Still, availing of the many benefits of technology is seen as an indication of women’s inferior commitment to birth and motherhood. A re-examination of our attitudes in this arena is badly needed. As Tuteur says, childbirth is not inherently safe – obstetrics, anaesthesia and C-sections have made it safe. Thank goodness for that.