‘I’m not finished grieving; but sometimes the light gets in’ 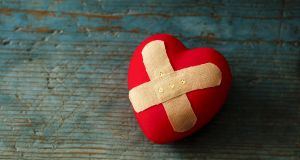 The gut punches still come. The memories still hurt, but sometimes, and just for a while, I can see my mother again as she really was.

One of the more challenging realisations that occurs in adulthood is that the life you take for granted will change unrecognisably as you go about living it. Perhaps it is the warping effect of retrospection – we strip our memories of authenticity in the act of remembering them – but my predominant memory of my youth is a general feeling of dissatisfaction and stasis.

It seemed then that nothing would ever change substantially; the world was a jar with the lid screwed tightly and I was trapped inside. The only surprises seemed negative, and of the sort to entrench me further in my circumstances.

Of course, I wasn’t looking carefully enough at my own reality, which is generally true of everyone in the present, and I was incorrect. My 20s saw a roiling storm of change and fluctuation. I stumbled unprepared into that decade feeling trapped by everything with which my childhood had gifted me, both beneficial and challenging, intoxicated and terrified by the prospect of the vast and unrelenting potential of youth. I shuffled out the other end of my 20s humbled and thoroughly tenderised by the arbitrariness of life.

The parent I had always hoped I would have well into my own adulthood was dead. The home that had been the context to my life was gone; sold away in the furious rush of financial necessity during my mother’s terminal illness.

In the place at my side which had always been vacant and I thought always would be, was a man. The type of man I never would have imagined for myself.

In the chaos and the grief, I expected him to excuse himself and melt into the horizon. He did not. He took my hand in his larger one, and held fast as life as I knew it rent itself to pieces around me.

My mother died three years ago. I wrote a column in this newspaper through her illness and after, which discussed that time and those experiences with as much self-reflection as I could muster. Grief does not have stages, and it far outlasts the considerate looks and sympathising messages you get in the weeks after someone has died.

Grief lingers long after other people have ceased to wonder whether you are alright and started to presume you must be. I am not finished grieving, and I don’t think that I ever truly will be – I’m not finished missing my mother, or thinking that life would be better, and certainly so, so different, if she were still here. Her absence now shapes my life just as much as her presence did.

Death is a consequence of living, and though my throat catches anticipating a big life event later this month without her there to take part in it, I can remember my mother now in a way that I could not even a year ago. Grief is not linear, and it is not hopeless. Sometimes, the light gets in, and the longer you live with grief, the more often this small marvel is visited upon you.

Painful unbidden memories and images of my mother’s last months flooded me unbidden and constantly at first. They still come, but now I am also able to remember other things which place the awful parts in context.

How she absolutely couldn’t ever take a decent photo (she once took a photo of me and when I checked had in fact photographed her own knee). How she filled her kitchen with fairy lights far past the dictates of good taste. How she ironed her bed sheets, and always put as much care and effort into every small task that she possibly could. How children always gravitated towards her because she didn’t patronise them and told them jokes.

Everything has changed except how I feel about her, even now. I will always have that

I am thankful to have reached a place in the grieving process (whatever that means) when the light is filtering back into the monochromatic landscape of memory, and I can see colour again.

The gut punches still come. The memories still hurt, but sometimes they are followed by a small, mundane gift of perspective and, just for a while, I can see her again as she really was. Everything has changed except how I feel about her, even now. I will always have that.

How can I tell my husband it is over and I want a divorce?
6