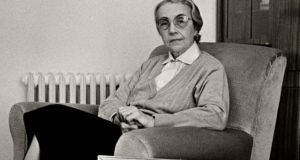 Nexhmije Hoxha in 1991, when she was under house arrest. Photograph: Barry Lewis/Corbis/Getty

To her enemies, Nexhmije Hoxha, who has died aged 99, was known as the Lady Macbeth of Albania, the sinister hidden hand in the 40-year Stalinist regime headed by her husband, Enver Hoxha, until his death in 1985. Towards the end of the regime, when Enver was virtually incapacitated by diabetes, Nexhmije is believed to have orchestrated a number of summary arrests, purges and show trials.

She remained in power behind the new president, Ramiz Alia, for a further five years until 1990 as chair of the Albanian Democratic Front, which sought to defend the legacy of her husband’s isolationist regime and its vaunted egalitarian spirit.

While ordinary Albanians had starved in the poorest country in Europe, she and Enver allegedly enjoyed supplies of Italian salami, French wines and western cigarettes

Nexhmije was conceivably Europe’s last unrepentant Stalinist and one of the few spouses of a communist leader to hold power in her own right. In January 1993 she was sentenced to 11 years in jail for embezzlement and abuse of state power.

While ordinary Albanians had starved in the poorest country in Europe, she and Enver had allegedly enjoyed supplies of Italian salami, French wines, western cigarettes and the services of French medical doctors. They were believed to own a number of houses, as well as 25 refrigerators, 28 colour televisions and 19 personal telephone lines. The Tirana newspaper Gazeta Shqiptare reported in 1993 that the couple had between them squandered a total of $15 million of state funds over the previous 50 years.

Under house arrest in Party Villa No 6, a tenement off Tirana’s Boulevard of National Martyrs, Nexhmije was a woman with a schoolmarmish demeanour, dressed in patent leather shoes and a twinset. She sat primly in an armchair throughout a media interview, occasionally patting her grey hair or offering Belgian chocolates from a box. In fluent French she explained how she and Enver had first met in Tirana in 1941 at a session of the newly founded Albanian Communist Party. Four years later, in January 1945, they were married.

She was born Nexhmije Xhunglini to Muslim parents in Manastir (now Bilota, in North Macedonia), and attended the Queen Mother Pedagogical Institute in the capital. In 1941, having joined the Albanian Communist party (later renamed the Party of Labour of Albania), she fought alongside her husband in the National Liberation Army against Italy’s fascist occupation. After ousting Mussolini, and with Albania now proclaimed a socialist republic, in 1946 Enver Hoxha became de facto head of state.

A cultivated woman who had been a teacher, Nexhmije introduced Enver to works by Mark Twain, Byron, Charles Dickens, Edward Lear and Jerome K Jerome – Three Men in a Boat was Enver’s “absolute favourite”, she told me.

Though she remained faithful to her husband’s legacy, she said he expressed regret for executing so many people

In power, the Hoxhas collectivised the Albanian land and began to uproot local customs such as gjakmarrje (blood revenge killings), which they considered part of backward Balkan tribalism. Though Nexhmije considered herself a modernising spirit, the Albanian politburo she helped create with Enver was in many ways a microcosm of the ancient, tribal Albania with its retributive sense of justice and purification of honour through vengeance. Party members were united less by Marxist-Leninism than by ties of family, blood and clan. More than 6,000 Albanians were executed as opponents of the Hoxha regime, around 34,000 jailed (1,000 of whom died) and 59,000 sent into internal exile.

As the 1950s gave way to the 1960s, Albania was torn apart by a cultural revolution modelled on Mao Zedong’s in China. By the time Nexhmije was appointed director of the Marxist-Leninist Institute in Tirana in 1966, Albania had become a self-immolated model of Stalinist planning. Enver had by now broken all diplomatic links with the Soviet Union: Nikita Khrushchev was a “disgusting, loud-mouthed individual” who had dared besmirch Stalin’s reputation.

As minister for propaganda during the early 1960s, Nexhmije helped to run the country’s feared Sigurimi secret police, whose devotion to the regime was brutal. “We made our mistakes, Comrade Enver and I,” Nexhmije admitted in her memoir, My Life with Enver (1998). Though she remained faithful to her husband’s legacy, she said he expressed regret for executing so many people.

In the late 1970s, now president of the Albanian Anti-Fascist Women’s Union, Nexhmije abolished the Muslim veil, as well as Albania’s ancient unwritten constitution known as the Kanun, first codified in the 15th century, which regulates marriages, land disputes and blood feuds. To Nexhmije the Kanun was another form of male oppression. Only when Albania’s patriarchy was eradicated, she believed, could Albanian women achieve equality.

In 1978 Sino-Albanian relations collapsed when Mao befriended the man who the Hoxhas (rightly) believed wanted to turn Albania into the seventh republic of Yugoslavia: Marshal Tito. The husband-and-wife team had effectively consigned Albania to ideological hibernation; an estimated 900 concrete pill boxes were built against the supposed threat of foreign invasion.

Small wonder the 12m bronze statue of Enver was pulled down during anti-communist demonstrations in Tirana in February 1991. “That was more painful to me than Enver’s actual death,” Nexhmije said. “It was shocking to think that people could be so barbarous.”

The previous year, Nexhmije had been forced to stand down from power, having earned herself another nickname, the Balkan Red Widow. She was released from jail in 1997 after serving five years of her sentence. She spent her last years in the company of her daughter, Pranvera, and two sons, Sokol and Ilir. They survive her. – Guardian