‘In the car from Dublin Airport I asked, Is this a dead country?’

Stories of 2018: New to the Parish, Swathi Sasidharan arrived from India in 2005 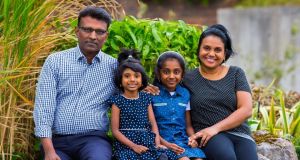 Swathi Sasidharan fell in love with writing when she was three years old. She knew her parents planned for their only daughter to pursue a career in medicine or engineering but secretly dreamed of becoming a professional writer.

“My mum wanted me to become a doctor and my dad wanted me to be an engineer. They didn’t give much importance to other extra curricular activities like art, painting or dance. At that time, in the 1990s, doctors and engineers were the best professions in the world.”

When she was eight years old, after winning a national art competition, Sasidharan built up the courage to ask her father if she could begin art classes. “He told me no, that I needed to concentrate completely on my studies. It was part of the culture to be very studious.”

Growing up in the city of Trivandrum in the southern Indian state of Kerala, Sasidharan hated the pressures of being an only child and recalls feeling a huge responsibility to excel at school. “Everybody would say to me ‘you’re so lucky to be an only child’ but it was really terrible. There is a saying that as an only child you’re not even allowed to die because you have so much responsibility on your shoulders. You have to be the perfect girl; perfect, perfect, perfect.

“I was put under too much pressure to succeed. My parents had so many expectations of me as their only child. It’s all I’d heard since I was born. They told me they stopped at one child because they wanted to give me the best life possible. Everything was my responsibility. But fortunately I was good at studying so I got high marks.”

After she finished school, Sasidharan followed her father’s wishes and successfully applied to study engineering at the nearby public university. However, she quickly realised that she had very little interest in the course and turned to her parents with a request.

“I went back home and told my dad ‘please, no, I’m not made for that, I don’t want to study it’. I had already told him while I was waiting for the engineering entry exam results that I was interested in literature. He told me that if I went that way I would have no money and no social status. And I believed him. Anyone who took English would end up as a teacher or maximum as a professor in a small college. Other than that, women especially, couldn’t rise up. So I went back to engineering.”

Following graduation, Sasidharan, found a job as a computer engineer in her home city. She had hoped to move to Bangalore or Chennai but knew her father would never let her leave their hometown. “My father wanted me to have a small job in Trivandrum rather than working with a big company like Accenture in Bangalore. That was really very tough for me because all my classmates left to get good jobs.”

Meanwhile, unbeknown to her parents, she began chatting online to another computer engineer called Sajeevan Achuthan in New Delhi. The pair developed a relationship through their online conversations and after 18 months decided to get married. However, Sasidharan’s father was already planning for his daughter to marry a local man. “My dad was very possessive and stubborn and he said he didn’t want me to get married outside the city. He wanted to break the relationship at any cost.”

In the car from Dublin to Athlone all I could see was farmland, cows and sheep. There were no people on the roads

Sasidharan’s father eventually agreed to accept the union after Sajeevan travelled to Kerala to meet the family. However, he did not want the extended family to discover his daughter had found a love match. “My dad didn’t want others to know it was a love marriage but I wasn’t ashamed to say it. That was back in 2005, everything has changed now. My cousins have actually ended up in love marriages themselves and some got divorced.”

Sasidharan was aware that her husband had secured work in Ireland but knew nothing about the country. She arrived in August 2005, six months after the couple were married in India. “I still remember coming out of Dublin Airport and the first thing I felt was the ice cold on my face. In the car journey from Dublin to Athlone all I could see was farmland, cows and sheep. There were no people on the roads, so I asked my husband, ‘Is this a dead country?’”

Shortly after her arrival, Sasidharan found a job as a senior software engineer. However, she never lost her love of writing and began documenting her experiences of life in Ireland through an online blog. “It was kind of like a diary where I could write down all my frustrations. I could talk about the culture shock, the problems I faced and trying to fit into Irish society.”

Having found her own childhood so difficult, Sasidharan always knew she wanted to have two children. However, it took the couple seven years to finally get pregnant. Sasidharan was 34 years old when Aadvika was born and three years later Anwita arrived. She describes her two daughters – who are now aged seven and four – as “chalk and cheese”. “Maybe with the first one, because I waited for her for so long and gave her so much attention, I was an overprotective mother. She is so attached to me. But the second one is a fiercely independent girl.”

Sasidharan has tried speaking her native language – Malayalam – to her daughters but they prefer English. “I explain a lot that we are Indian and that’s why we have black hair, black eyes and brown skin. But I also say we are Irish because we are living in Ireland but we are of Indian origin.”

Sasidharan still misses Kerala but is happy in Ireland. “India is a very patriarchal society. I have more freedom here and feel more value as a woman. My daddy is 73 years old and still I’m not allowed to go outside the gate without his permission in India. In Ireland I don’t have to ask my husband permission, he doesn’t mind where I go. Maybe he’s changed here too.”

Earlier this year Sasidharan’s blogs were turned into a book entitled Raindrops On My Memory Yacht. “In India people would ask ‘what is she trying to prove by writing a book?’ But this is what I like doing. Maybe I’m not doing it for money but it’s for my happiness. It’s not only famous people who can write about their lives. Everybody has their own story to tell.”