Charles Aznavour obituary: French icon who sang of life as it was lived

Composer, film star and lifelong champion of the Armenian people 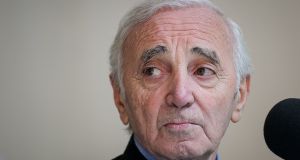 Charles Aznavour, one of France’s most celebrated singers of popular songs as well as a composer, film star and lifelong champion of the Armenian people, has died. He was 94.

At an age when most performers have long retired from the footlights and the brutal, peripatetic life of an international star, Aznavour continued to range the world, singing his songs of love found and love lost to capacity audiences who knew most of his repertoire by heart. In his 60s, even then a veteran of a half century in music, he laughed off talk of retirement.

His accomplishments were prodigious. He wrote, by his own estimate, more than 1,000 songs, for himself and for others, and sang them in French, Armenian, English, German, Italian, Spanish and Yiddish. By some estimates, he sold close to 200 million records. He appeared in more than 60 films, beginning with bit parts as a child. His best-known film role was probably as a pianist with a mysterious past in François Truffaut’s eccentric 1960 crime drama Shoot the Piano Player – a part that Truffaut said he had written specifically for Aznavour.

Chahnour Varenagh Aznavourian was born in Paris on May 22nd, 1924. His parents, Mischa and Knar (Baghdasarayan) Aznavourian, who were both entertainers, had come to France fleeing Turkish oppression. When the Aznavourians were denied visas to America, they opened a restaurant near the Sorbonne and made the city their home.

In 1933, at the age of 9, Charles was enrolled in acting school, and he was soon part of a troupe of touring child actors. At 11, in Paris, he played the youthful Henry IV in a play starring celebrated French actress and singer Yvonne Printemps.

But his earliest inspirations were singers, notably French stars Charles Trenet, Édith Piaf and Maurice Chevalier. “Trenet for his writing, Piaf for her pathos and Chevalier for his professionalism,” he told The New York Times in 1992, “and all three for their tremendous presence on stage.”

One critic wrote dismissively of his 'odd looks and unappealing voice'

Also high in his pantheon were Carlos Gardel, the Argentine tango singer, and Al Jolson. “Gardel and Jolson were far apart,” he said, “but they had the same pathos.” He learned his idiomatic English from Frank Sinatra’s records, but he considered Mel Tormé and Fred Astaire his favourite American singers.

Aznavour’s career spanned the history of the chanson realiste, the unvarnished tales of unrequited love, loneliness and anomie that found their apotheosis in the anguished voice of Piaf. He wrote songs for her and for Gilbert Bécaud, Léo Ferré, Yves Montand and others. When Piaf rejected one of his songs, I Hate Sundays, he gave it to Juliette Gréco, then the darling of the Left Bank philosophers and their acolytes. When Piaf changed her mind, she was enraged to find that she’d lost the song and, according to François Lévy, one of her biographers, confronted Aznavour, shouting, “What, you gave it to that existentialist?”

He spent nearly eight years in Piaf’s entourage, as a songwriter and secretary but, he insisted, not a lover. (“I never had a love affair with her,” he told an interviewer in 2015. “That’s what saved us.”) He accompanied her to New York in 1948 and stayed for a year. “I lived on West 44th Street, ate in Hector’s Cafeteria and plugged my songs,” he recalled, “with no success.”

Back in Europe, he spent years singing in working-class cafes in France and Belgium, without much success. One critic wrote dismissively of his “odd looks and unappealing voice”.

Then, in 1956, he was an unexpected hit on a tour that took him to Lisbon and North Africa. The director of the Moulin Rouge in Paris heard him at a casino in Marrakesh and immediately signed him. When he was back in Paris, offers poured in.

In 1958, the French government lifted a long-standing ban on playing on the radio some of Aznavour’s more explicit songs, such as Après l’Amour, which recounts the aftermath of an episode of lovemaking. “I was the first to write about social issues like homosexuality,” Aznavour told The New York Times in 2006, referring to his 1972 song What Makes a Man?. “I find real subjects and translate them into song.”

He returned to New York in 1963 and rented Carnegie Hall, where he performed to a packed house. (Among those in the audience was Bob Dylan, who later said it was one of the greatest live performances he had ever witnessed.) A triumphant world tour followed.

Thereafter, the United States became a second home. Aznavour performed all over the country, often with Liza Minnelli. He became a fixture in Las Vegas for a time and there married Ulla Thorsell, a former model, in 1967. She was his third wife. In recent years he had lived in Mouriès, in southwestern France. Aznavour had six children.

As a child, he watched his father go broke feeding penniless Armenian refugees in his restaurant. As his fame grew, he became a spokesman and fundraiser for the Armenian cause. He organised help worldwide after an earthquake killed 45,000 people in Armenia in 1988. And when the country broke away from the crumbling Soviet Union in 1991, it made him an unofficial ambassador. He displayed the Corps Diplomatique plaque on his car as proudly as he wore the French Legion of Honour ribbon in his lapel.

French president Emmanuel Macron said in tribute: “Profoundly French, viscerally attached to his Armenian roots, famous in the entire world, Charles Aznavour accompanied the joys and sorrows of three generations. His masterpieces, his timbre, his unique influence will long survive him.”