Do you like my new dress? It’s made out of bin liners

Hilary Fannin: I’m drawn to the notion of a better self – a calm, centred, eco-self 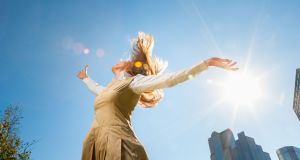 “I spent some time perusing online eco-clothing brands. I figured that if I bought fewer items I could afford to start wearing jeans made from recycled ocean plastics.” Photograph: iStock

I went to Clonakilty recently and bought myself a bamboo toothbrush and a dress made out of bin liners. It was a good feeling to consume in an ethical fashion – I’m delighted with my new gúna and, somewhat sadly, I like my new toothbrush (which looks like a big wooden colouring pencil) in a way that I don’t suppose I’ll ever like a toothbrush again.

I’m occasionally drawn to the notion of a better self – a calm, centred, plausible eco-self, someone who has the time and inclination to wake up and smell the home-made chutney. This intimation of an idealised self – who, by the way, is also lissom, multilingual and leading a rhapsodic life in a fern-filled glade with a sea view, a raspberry bush and an occasional duck – is one that generally doesn’t last terribly long.

When I’m in Clonakility, though, the dream intensifies and I chase its shadow. I see myself cycling along the estuary, a backpack made out of recycled county councillors slung across my back, then spinning into town to buy walnuts and washable sanitary wear before cycling home again to garden for bees.

But once back in the city, my good intentions seem to perish in boil-in-the-bag pabulum and exotically flavoured gins.

My environmentalist mate Mindy O’Brien, who is going to turn me into a water butt if she catches me with another single-use plastic bottle in my grubby mitt, is, however, a proselytising believer in “the power of one”, so, home again in Dublin, I spent some time perusing online eco-clothing brands. I figured that if I bought fewer items I could afford to start wearing jeans made from recycled ocean plastics that wouldn’t poison tuna fish, or make dolphins weep, or keep a bunch of 10-year-olds hunched over sewing machines deep into the oily night.

Various upcycling and recycling fashion websites offer interesting incentives to invest in their wares. One, for example, offers, for every item it sells, to remove a pound of rubbish from oceans, beaches, rivers, streams, creeks and lakes. Almost all the others use sustainable and renewable materials and processes, including working with ethical labour and fabrics, using less water and paying higher wages.

I struggle with the power-of-one concept (hell, I struggle with anything that involves personal responsibility on any level), but what’s to lose, I’ll give it a lash. You’ll recognise me – I’ll be the one in the corner wearing the jumpsuit made out of toilet rolls and three empty washing-up liquid bottles.

One thing though: if I was a brand manager, or writer of blurbs for the ethical-clothing industry, I might have a serious rethink about marketing strategy. Maybe it’s just me, but even a whiff of wholesomeness in the drapery department is enough to have me running for the hills in a polyester catsuit with a couple of bludgeoned seals on my feet. (Sorry if that’s too graphic for you, but you know what I mean.)

The T-shirt we purchased was worth its weight in comedy gold, if only for its label, which included a poetic summation of its makers’ organic ethos

I was in Majorca last summer, in a dinky little inland town full of retirees in sensible footwear, and it was very, very hot and we ran out of clean T-shirts. Passing by the clusters of souvenir shops (one of which sold baby vests emblazoned with the slogan “Nine Months Ago My Mom Read 50 Shades of Grey”), we eventually found a place selling tops that looked plain and muted and didn’t have little alligators biting into them either. The shagging things were eye-wateringly expensive, so we bought just the one and I continued laundering my own mephitic ware in the town’s ornamental horse trough.

The T-shirt we purchased – and a fine T-shirt it was too – was worth its weight in comedy gold, if only for its label, which I have kept all this time and which included a poetic summation of the makers’ organic ethos: “We are not a brand. We are humans. We are sewers [sic – I think they meant people who sew], we are designers, we are farmers and we are accountants. We are computer freaks, we are dyers, we are marketing nerds. We are models and salesmen. We are lovers, we are thinkers, we are parents, we are rebels and artists.”

Yadda yadda. Hey, just give the customer the damn T-shirt and they’ll reimburse you, quite possibly with hard-won earnings that they’ve just wrestled from the jaws of a multinational.

Anyway, I’m going to go back to Clonakilty now, to buy some winter boots fashioned from a milk churn and an old Cortina.