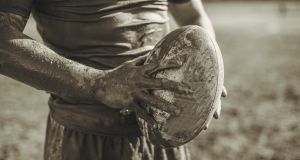 My great-granny knew all about head injury assessments (HIAs) in the early 1900s when her sons were at school. She was infamous for many of her opinions, but may eventually be proven right on this one.

In 1913 she took on James Larkin and insisted her son, an apprentice, could not be locked out. In 1916 she had to be held back from confronting “little bits of brats” breaking their mothers’ hearts, in the GPO. The many stories handed down over a century were dismissed as the ravings of a madwoman by most of the family.

Although the streak of madness was in all of us, we just accepted where it came from. And like all of us, she loved sport and never trusted anyone who wasn’t interested in it. The problem arose when her son took up rugby.

“Schools rugby is the purest form of the game.”

She kept hearing this, along with: “This is more than a competition, rather a social and cultural point on the college calendar.”

Suddenly they linked arms, crashed together, I could hear his neck cracking

Well they remembered the one she attended. She wore her lilac wedding costume for the last time. It was her first rugby match and there were no televisions in those days.

She was standing on the sideline when it happened. This is in her own words:

“The referee blew his whistle and started shouting. Suddenly they linked arms, crashed together, I could hear his neck cracking. My child missing under a snorting mob. Then I saw him.

“He had escaped and was running with the ball when this thug, deliberately dived at his ankles. My baby came down like a ton of bricks.”

She left the sideline like a bullet, jumped and got the bully by the throat. He fell. There was no resistance. She brought her handbag down on his head. A flying stampede approaching from her right couldn’t stop.

She awoke surrounded by men. Not one of them sympathetic. While the paramedic strapped her shoulder, my grandfather spoke only one line, “Our son is sleeping rough somewhere in the city. We may never see him again.”

She did find him and frogmarched him to the old Richmond hospital for a HIA. This was repeated regularly after his games and her own eye examinations.

Through five generations, rugby was strictly a spectator sport in our family. Sadly this fear of concussion maybe stopped us producing a Brian O’Driscoll or a Johnny Sexton.

The patriotic cellist who refused to play Rule, Britannia!
6

Do we need to be concerned about taking a Covid-19 vaccine?
7

Want to exercise but can’t face going for a run? Here’s what to do
10