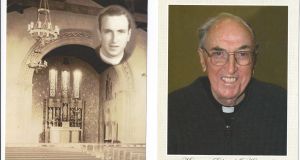 Born in Urlingford on February 11th, 1925, Eddie Kavanagh was educated at St Kieran’s College, Kilkenny. Weekends were spent playing for Tullaroan, interspersed with working in the family bus business.

Having entered the seminary in 1942, he was selected in 1947 to hurl for Kilkenny, despite the strong disapproval of the church hierarchy, playing in the All-Ireland final against Cork, a team which included Jack Lynch and Christy Ring. Many GAA aficionados regard the match, which Kilkenny won by one point, as the greatest hurling final of all time.

Ordained in 1948, Eddie was destined to become one of hundreds of Irish priests to minister in California, but reflective of his stubborn streak and to do things “his way”, he delayed his departure, once again much to the chagrin of the church authorities, to play victoriously for Tullaroan in the county final.

On arrival in Sacramento he was assigned to the parish of St Rose in the unfashionable south of the city and remained there for 67 years until his retirement in 2015. It is believed to be the longest serving catholic ministry in one parish in the whole of the United States.

Created monsignor in 1965, Eddie, while foremost a priest, had a keen business acumen, working tirelessly for the poor and hard pressed.

Over the decades he raised millions of dollars for St Patrick’s Home for Children, St Patrick’s School, a day-care centre and a large community centre which hosted many Irish artists as a draw to raise funds.

In the 1970s with the orphanage closed, yet more cash was raised for multiple residences to house young people and their carers.

In 1960 in recognition of his youth work he was appointed chaplain to the Winter Olympics at Squaw Valley.

Ahead of his time, the monsignor reached out to the Hispanic community. He never had an answering machine and was available 24/7, sometimes being called to the county jail in the middle of the night for those that were on the wrong side of the law.

Bishop Jaime Soto of Sacramento commented following his death that “Msgr Kavanagh was an indomitable priestly figure, a force of nature. He cared deeply for the community, working tirelessly on behalf of the poor and children . . . Did you need a job? A place to live? Maybe an old car to get that job? A few dollars for gas? Msgr Kavanagh would always find a way.”

A priest of principals, he was a passionate pro-life supporter and made headlines across the US when he challenged California governor GrayDavis on the issue in 2003.

On the one hand conservative, he nonetheless encouraged the involvement of women in the church, organising large and financially remunerative lunches for the Catholic Daughters of America. He served as moderator of the Diocesan Council of Catholic Women and with the non-denominational United Way.

Christians of all faiths were welcomed in to St Rose, with him often telling family visitors from Ireland “better they come here than other churches down the road”.

He died on March 17th. The thousands of people, many Hispanic, who attended the monsignor’s removal at St Rose, taking over three hours to file past his remains, the all-night vigil and the funeral Mass at Sacramento Cathedral are a testament to the gratitude, esteem and admiration in which he was held by the underprivileged people of Sacramento.